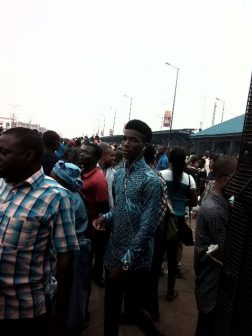 Hundreds of stranded commuters on the Lagos-Abeokuta Expressway on Wednesday in Lagos appealed to the Federal Government to end petrol scarcity which affected transport cost.

The commuters disclosed in interviews that scarcity of petrol caused an increase in transport cost and reduced the number of commercial vehicles in operation.

A correspondent, who took a trip to the highway, reports that hundreds of commuters were stranded at various bus stops, including Ilepo, Iyana Ipaja, Dopemu, Cement and Ikeja Along.

They scampered for spaces in the few available commercial vehicles.

A food vendor in Ikeja, Mrs Husna Shehu, appealed to the Federal Government to intensify efforts to end fuel scarcity to alleviate the suffering of road users and other Nigerians.

“The government should make petrol available in large quantities so that it will be a bad business for anyone to hoard it,” she advised.

A technician in the Aluminum Village, Mr Tayo Sijuanu, said that he spent up to N1,000 from Sango Ota to Dopemu.

“Before, I was not spending more than N200 to get to this place, but today the situation is different; we want government to help us,” he said.

An engineer, Mr Tomi Adekanbi, however, blamed the increase in transport fares on greed among transporters.

Adekanbi said that queues of vehicles had reduced in many filling stations, implying availability of petrol.

“All these big buses called ‘Parker’ use diesel, and diesel is not scarce; so, why are they charging N300 for a trip to Oshodi,” he asked.

Mr Solomon Onyekwere, a civil servant, who said that the government was committed to ending fuel scarcity, called for sanctions against greedy transporters.

“The Bus Rapid Transit (BRT) collected N200 for transport to Oshodi this morning instead of N100 because people are desperate and tired standing on the road,’’ he said.

In interviews, some transporters said that fuel had yet to be available.

A bus driver, Mr Wasiu Ifalana, who plies the Sango-Oshodi Route, disclosed that he queued for hours to buy fuel at an exorbitant price on Tuesday and had to transfer the cost to passengers.

“I have a fixed amount I must deliver to the owner of this bus daily, after spending hours at the filling station. How can I meet up?” he asked.

Another bus driver who simply identified himself as Sunny also said that fuel had yet to be available.

He appealed to the government to end the scarcity fast.