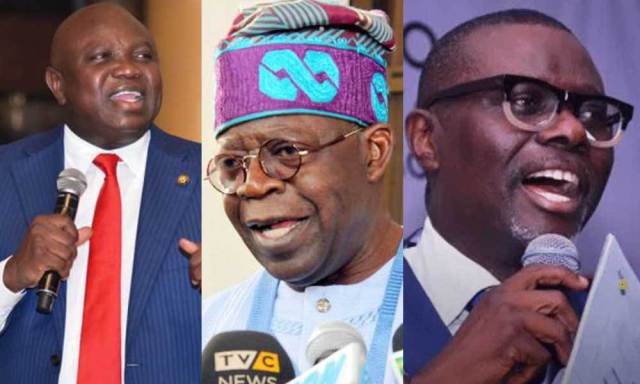 Tinubu, however, agreed that the said master plan may not have been perfect. After months of rumours, Tinubu also formally endorsed the candidacy of Jide Sanwo-Olu, who served under him when he was the governor of the state. He described Sanwo-Olu as being ” endowed with superlative vision and commitment.” Sanwo-Olu also has the backing of all but four members of the state’s assembly and all the chairmen of local councils in the state.

But Governor Akinwunmi Ambode earlier on Sunday said the aspirant, who also served under him, was not fit to lead Lagos owing to his criminal past and his mental health. “This particular aspirant is somebody that has been arrested for spending fake dollars in a nightclub in America, and he has been detained for months,” Ambode said. “He doesn’t have the competence to do what he is being propelled to do. This is somebody that has gone for rehabilitation before. The records are there at the Gbagada General Hospital.”

That Ambode tacitly acknowledged that he has access to Sanwo-Olu’s medical record is a violation of Section 44 of Nigeria’s Code of Medical Ethics as laid down by the Medical and Dental Council of Nigeria. The section states that “any information about the patient that comes to the knowledge of the practitioner in the course of the patient-doctor relationship constitutes a secret and privileged information which must in no way be divulged by him to a third party.”

The governor further said that he was the better aspirant and will be able to defeat the aspirant supported by his erstwhile godfather and also has the support of the Mandate Group, one of the most influential blocs in Lagos APC.

But Tinubu insisted that his anointed choice, having served in the last three administrations in the state, was better placed to continue the implementation of the Lagos masterplan. “While possessing a wealth of experience and exposure, he is a young man endowed with superlative vision and commitment,” he said in a statement on Sunday. “Most importantly, he understands the importance of the blueprint for development.

“He esteems it as a reliable and well-conceived vehicle for the future development of the state.” This is not the first time Tinubu will be antagonistic to the second term bid of his endorsed candidates. In 2011, he was reportedly against the re-election of Raji Fashola as the governor of the state. Both, however, were able to resolve their differences and Fashola was presented by now-defunct Action Congress of Nigeria as its candidate.

SANWO-OLU TO AMBODE: You Will Regret Decent To Low Conduct