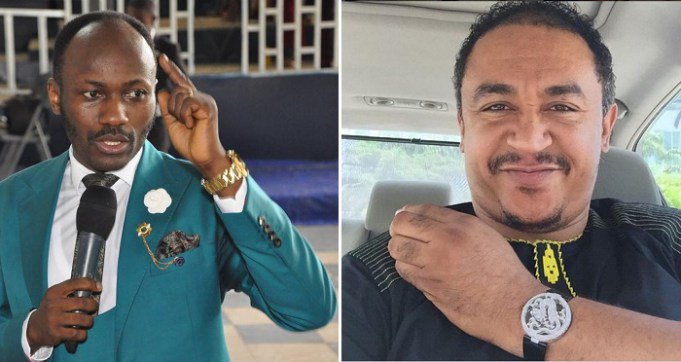 This is in response to Apostle Suleman’s statement on Friday asking OAP Freeze to stay in his field and stop questioning tithe.

Freeze, the leader of the #FreeNation as popular called, challenged all Nigerian pastors to bring biblical clarifications for tithe giving in churches instead of going sentimental about the issue.

On his instagram page @daddyfreeze he wrote: “The leader of the #FreeNation greets you and brings glad tidings.

“It would have gladdened my heart profoundly, and done the body of Christ much eminence, if you had shed some scriptural light on the tithing issue, as against going down the well worn path of sentimental and emotional blackmail your ‘elders’ have familiarized us with.

“In 2017, Nigerian Pentecostal Christianity can no longer lean on the seemingly weak foundations it was established upon, as the numbers are clearly not adding up, hence the need for the #FreeTheSheeple movement to be birthed, to question conventional wisdom and challenge obtuse doctrines.

“You made a statement that I find disheartening. According to you, ‘The GO corrected a wrong notion and I dared to respond to him’. Let me ask you, is he God? Or do I look like those people kissing and hugging his empty chair as seen in that forlorn video that went viral?

“With all accorded respect sir, I have EVERY RIGHT, to demand an explanation for a doctrine that is evidently not in symphony with the teachings of Christ, or in synchrony with Biblical scripture.

“Therefore, until either you, or anyone else provides conclusive biblical clarification, for why your churches collect tithe, despite the glaring contradiction that your first teachers and pastors, the 12 disciples and the churches they set up never did, this matter would linger.

“About the debate you have suggested I’m all up for it, let’s communicate the venue and have this addressed once and for the last time.