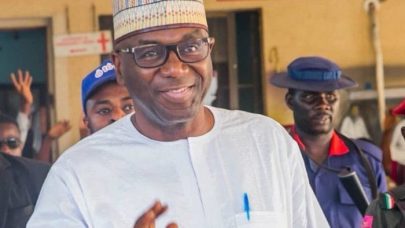 The chairman of the tribunal sitting in Ilorin, Justice Bassey Effiong, said the petitioners were alleging directly that the second respondent, AbdulRazak presented a fake WAEC certificate to INEC before the March 9 gubernatorial election.

“All evidences before us show that Abdulrazak sat for the examination and was therefore qualified to run for the office of the governor.

“From all the evidences before us, we hold that the petition lacks merit and is hereby dismissed,” the chairman of the three-man panel, announced in an unanimous judgment.

Effiong said the law stated that where a petitioner made the commission of a crime the kernel of his petition, then he must prove it beyond reasonable doubt.

“Have the petitioners discharged the burden of proof expected of them, and from the evidence in this case, the answer is a resounding ‘No’.

“We hold that all the evidences presented by the West African Examination Council (WAEC) which the petitioners had relied upon and the subpoena, were at variance with the pleadings of the petitioners,” he said.

Effiong said WAEC, which is the only statutory body to issue such documents had made it clear that AbdulRazak’s credential had emanated from it.

He said that the witness presented by the petitioner, Olorunshola Victor, WAEC senior examination officer in Ilorin office, presented the subpoena documents, confirming the authenticity of the WAEC certificate of AbdulRazak.

“Victor told the tribunal that he was standing in for the first witness, Waheed Amode, who could not appear in court because of an unaffordable official meeting he had in Abuja

“He confirmed that the governor sat for his West Africa School Certificate (WASC) examination in 1976 at the Government College, Kaduna,” Effiong said.

The chairman said that the second respondent also presented a witness, who confirmed the authenticity of the WAEC certificate belonging to AbdulRazak.

“The witness, Mohammed Yaro told the court that he graduated from Government College, Kaduna, in 1976 with AbdulRazak and they both sat for the WAEC examination.

“The witness said that, the governor’s serial number in WAEC was 119, while his was 122,” Effiong said.

The chairman said that all documents submitted by the respondents were not forged, as the documents were applicable to the election and the subsequent elections to come.

“The respondent was qualified to contest as at the time of the election and has won the election, having polled majority of the votes,” Effiong said