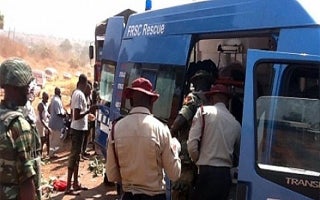 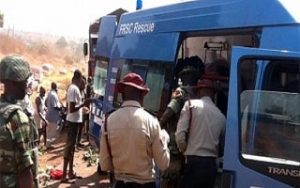 File Photo: FRSC officials at the scene of accident

Five persons were on Friday killed in a road crash, and 10 others sustained injuries along Ibadan –Lagos Expressway when the commercial bus conveying them burst into flames.

The Ogun State Sector Commander of the Federal Road Safety Corps, FRSC, Clement Oladele, told PREMIUM TIMES the crash occurred at about 8.49a.m. around Onigari, a town on the border of Ogun State and Oyo State.

He said the crash involved a commercial bus, which was travelling from Sokoto but stopped briefly in Ibadan to pick passengers heading towards Lagos.

The bus lost control due to excessive speed, and collided with the concrete curb in the middle of the road and burst into flames.

He explained that a total of 10 male adults sustained injuries from the crash, while five of the passengers comprising four male adults and one female adult died.

He advised members of the public whose relatives travelled to contact the commission at KM27 Ibadan – Lagos Expressway at Ogunmakin or the Olabisi Onabanjo University Teaching Hospital (OOUTH) , Sagamu, where the injured victims are receiving treatment.

He said the bodies of those who died in the crash have been deposited at the hospital’s mortuary.

Mr Oladele advised the public to drive cautiously on the Lagos – Ibadan Expressway, stressing that the Expressway is still undergoing rehabilitation.

He said the recommended speed at construction area is 50 kilometers per hour, and also reminded passengers to caution drivers driving recklessly.

He said passengers can call the commission on the toll free number 122 to report recalcitrant drivers.