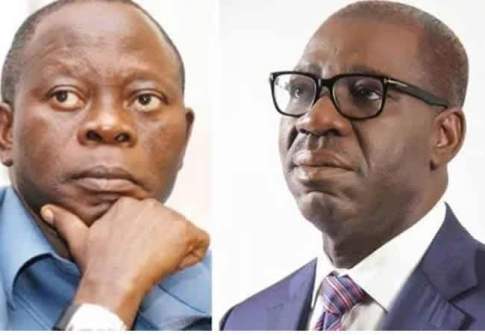 Governor Godwin Obaseki of Edo State on Sunday took a swipe at the National Chairman of the All Progressives Congress (APC), Comrade Adams Oshiomhole, for breaking protocol whenever he visited the state without official notification.

He spoke when he played host to former President Goodluck Jonathan who paid him a private visit, after visiting the family of Chief Gabriel Igbinedion, wondered why the former Governor who knew the protocol would deliberately refuse to follow it.

Oshiomhole who was in Benin on Saturday to attend the burial ceremony of late Madam Cecilia Agbonyinma, mother of Hon. Ehiozuwa Agbonyinma, was booed at the Benin Airport by some youths.

His convoy was also pelted with empty water cans, even as heavy security presence at the airport barred the youths from getting close to the convoy.

Also, the road leading to Oshiomhole’s residence was barricaded with two trucks, one of which was later set ablaze.

It was gathered that the barricade was to prevent any political meetings from holding at Oshiomhole’s residence.

Security was later beefed up around the house to forestall any attacks at night.

But, speaking to newsmen about the airport incident, Obaseki said Oshiomhole should have informed the state government about his visit to the state.

Jonathan had told journalists: “Traditionally, for somebody who has been a President, when he goes to a state, he has to pay a courtesy call to the Governor of the state. If you are not free, fine, but at least I informed him.”

Addressing journalists after Jonathan’s visit, Obaseki criticised Oshiomhole for breaking protocol by his failure to formally notify his office whenever he visits the state.

He said “He (Jonathan) is just extending the courtesy, as the President, someone who has served the country in the highest level and you heard what he said.

“There is a courtesy when you are going to visit a state, you want to inform the person in charge of the state that you are coming and when you have time during a visit, you can now pay him a courtesy call.

“Unlike the unfortunate incident, we have been having in Edo State. It is really sad where somebody who had been the Governor of a state visiting the state and does not realize that courtesy demands that he should inform the governor or the governor apparatus of his visit and the chief executive in charge of his security when he is in the state.

“It is really sad and unfortunate that people who have served, who should know better decided to behave the way they do or behave with impunity and other sense of lawlessness.”