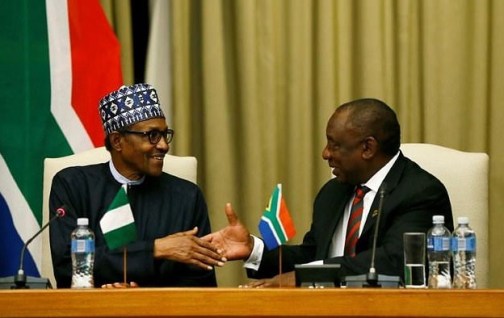 Nigerian President Muhammadu Buhari on Thursday began a visit to South Africa and minced no words when he condemned in the strongest terms the attack on Nigerians and other Africans in the country, and called for implementation of measures meant for the prevention of such incidents.

He also called for the protection of foreigners.

On Thursday, Buhari and his host Cyril Ramaphosa went into long-planned talks aimed at bolstering trade ties and political cooperation as both leaders struggle to boost their flagging economies.

But the talks were expected to be overshadowed by the violence in South Africa targeting foreigners, which included Nigerians. Mobs descended on foreign-owned stores in and around Johannesburg in early September, destroying properties and looting.

“We call for the strengthening and implementation of all the necessary measures to prevent the re-occurrence of such actions,” Buhari said at the start of the talks.

The violence — in which at least 12 people were killed, most of them South Africans — sparked fury in Nigeria and saw hundreds of migrant workers repatriated to the country.

“We took strong and decisive measures to stop the attacks and prevent any re-occurrences,” he said at Union Buildings, the seat of the presidency in the capital Pretoria.

For his part, Ramaphosa, who has repeatedly apologised over the attacks, reiterated his government’s “deep regret at the incidents of public violence”.

“Some of the acts of violence were directed at foreign nationals and some of whom coming from your own country”.

“We firmly condemn all forms of intolerance and will not hesitate to act against criminal acts and violence,” he said.

The three-day state visit, the first to South Africa by a Nigerian leader since 2013, had been planned before the wave of violence.

A Town Hall meeting” between Buhari and Nigerians living in South Africa is scheduled for Friday to listen to the expats’ experience and showcase efforts to support them.