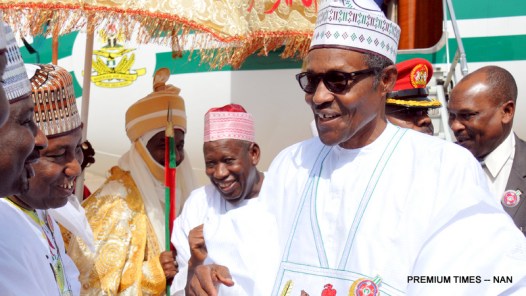 President Muhammadu Buhari said on Friday that he could not interfere in the Kano emirates controversy because the state legislature had gotten involved.

Mr Buhari said this on Friday when he met with the Kano State Governor, Abdullahi Ganduje, and some newly elected Kano lawmakers.

Details of the meeting were sent to PREMIUM TIMES by Mr Buhari’s spokesperson, Garba Shehu.

“By the constitution of the Federal Republic of Nigeria, the Governor of Kano State has his own roles, once a matter is in the hands of the House of Assembly (like in Kano), the president has no constitutional right to interfere,” Mr Shehu quoted President Buhari as saying when speaking about the conflict between the Kano emir and the governor.

It has been reported how the Kano State Government created four new first class emirates to add to the Kano emirate. Many believe the move was to whittle down the influence of the current Emir of Kano, Muhammadu Sanusi, who allegedly opposed Mr Ganduje’s reelection last year.

He was later prevailed upon not to dethrone Mr Sanusi as Northern eleders intervened to resolve the differences between the emir and Mr Ganduje.

After his meeting with the president, Mr Ganduje told journalists that the peace moves were still ongoing.

“We have five first class Emirates in Kano State and the Emir of Bichi is from one of the Emirates. I cannot come with the whole five Emirates at the same time. Yes, there is the Northern Elders Committee on the misunderstanding between the Emir of Kano and Kano State government. We met with that committee and dialoguing is still on. That is all I can say.

“It is a constitutional issue and the governor and the Emir, we are working within our own jurisdictions and the problem will be solved amicably,” he said.

Earlier, while addressing his guests, Mr Buhari told them to live up to the promises they made to their constituents.

Read the full statement by Mr Shehu on what transpired between the president and his guests below.

WE WILL NOT COMPROMISE PEACE AND SECURITY OF NIGERIAN PEOPLE – PRESIDENT BUHARI
President Muhammadu Buhari has assured that the separation of powers between the Federal Government and the states notwithstanding, he has enough grounds in the constitution to ensure that the security of Nigerians is not compromised.

The president said this Friday while receiving the Governor and newly elected legislators on the platform of the All Progressives Congress, APC, from Kano State.

President Buhari advised the elected officials to live up to the promises they made to their constituents to justify the confidence reposed in them.

Governor Umar Ganduje who led the delegation, thanked the President for Federal Government projects in the State including: the Kano – Abuja road reconstruction; the modern railway from Kaduna to Kano, and from Kano to Niger Republic; the gas pipeline from Ajaokuta to Kaduna and from Kaduna to Kano; dualisation of Kano – Katsina highway; as well as the construction and equipping of new terminal wing of the Mallam Aminu Kano International Airport.

He also apprised the President of efforts of his government to make life better for Kano citizens especially in terms of security and education.

“We have done a lot in the area of security, even installing CCTV cameras in black spots and all major routes into Kano state. We also have a multi-purpose vehicle for monitoring, which has helped in arresting kidnappers and Boko Haram terrorists. We have also established an army training area.”

He said the State has also curtailed herdsmen/farmers clashes by establishing settlements.

On the disturbing phenomenon of out-of-school children, the governor said, “We used to have One Million out-of-school children but now we are down to about 400,000 on account of the new education policy which now makes schooling free and compulsory from basic to secondary school, complemented with free feeding, free uniforms and free instructional materials.”

He said his administration had also recruited 600 teachers to teach mathematics and English as well as 3,000 teachers for Almajiri schools that will be incorporated into the normal school system.

The governor also requested for Federal Government intervention in the completion of the Kano River Irrigation scheme; the establishment of a Federal Medical Centre; and desilting of the 24 dams in the State.

Why thousands may miss 2020 UTME- JAMB