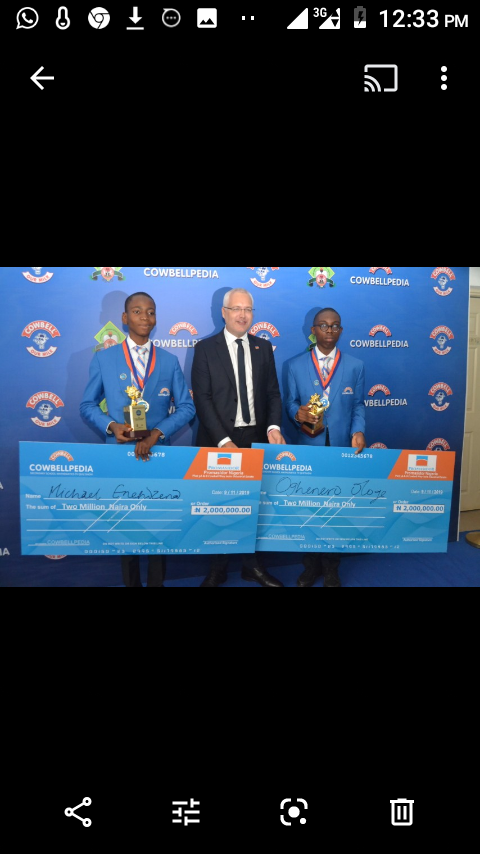 Mathematics education is the very foundation of society and the pillar of science and technology without which a nation can never become prosperous and economically independent.
This was the submission of Managing Director of Promasidor Nigeria Limited, Mr. Anders Einarsson while speaking last weekend in Lagos, at the finals of season 5 of the Cowbellpedia Secondary Schools Mathematics Television Quiz Show sponsored by Cowbell Milk, the flagship brand of his company.
Einarsson further explained in a chat with newsmen that the importance of Mathematics in the life of individuals and nations cannot be over emphasised, adding that he was very impressed that the Cowbellpedia initiative has achieved its objective going by the record number of 56,073 participants that took the qualifying examination this year.
This according to him, is a huge testament to the Cowbellpedia initiative and the interest that Nigerians have in Mathematics. “I am convinced that with the arrays of talents displayed by these young Nigerians here today, Nigeria can rule the world. I advise the youth to continue to sustain their interest in Mathematics because the future is theirs,” he said.
He maintained that Promasidor has found a correlation between the development of cognitive ability that Cowbell Our Milk, gives, and its passion for Nigeria.
Also speaking at the event, Mr. Stephen Adebunmi, who represented the Acting Registrar of the NECO, Mr Abubakar Gana, explained that since Mathematics is very central to human and nation’s capacity, the subject deserves all the support from public and private organisations.
The NECO boss commended Promasidor for providing “an excellent platform” to showcase these young Nigerian Mathematicians and future inventors.
Meanwhile, in a thrilling Cowellpedia Mathematics competition final encounter last weekend, Michael Enehizena of The Scholars Universal Secondary School, Ota, Ogun State and Oghenero Ologe of Zionfield Pinnacle School, Ikorodu, Lagos State won the crown in the Junior and Senior category respectively.
Also in the Junior category, Abdul-Quayum Alli, of Ota Total Academy, Ota, Ogun State, and David Charles of Graceland International Secondary, School, Port Harcourt, Rivers State, came second and third respectively.

Akinyemi Dabira of The Ambassadors College, Ota, Ogun State and Hezekiah Olabisi of Bibo Oluwa Academy, Ilesha, Osun emerged as first and second runner-up respectively in the Senior category.
The two champions got N2 million each and an all-expense paid education excursion outside the country.
The first and second runners-up in each category received N1.5 million and N1 million respectively, while the teachers of the top prize winners were awarded N500, 000. Those of the first and second runners-up received N400, 000 and N300, 000 respectively.
– Ends –
Promasidor was founded in 1979 by Robert Rose, who left the United Kingdom in 1957 for Zimbabwe to pursue his African dream. It has since grown with presence in 25 African countries. Promasidor Nigeria has achieved tremendous growth since it commenced operations in 1993 with 6 product brands in the market.

Promasidor produce, distribute and market quality range of products such as Cowbell, Loya, & Miksi milk, Top Tea, Onga seasoning across the country bringing joy to millions of consumers. Its Milk powders, culinary and beverage products are affordable, delicious and good for all.

DAPO ABIODUN AND POLITICS OF FRIENDSHIP