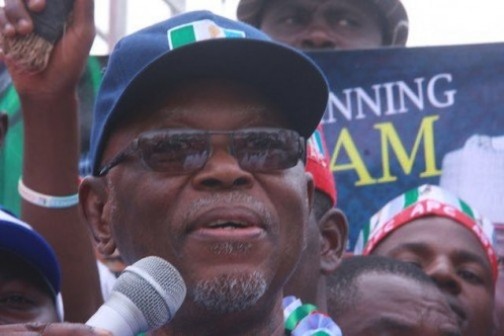 The National Chairman of the All Progressives Congress, Chief John Odigie Oyegun Thursday explained that his loyalty to the present administration led by Muhammadu Buhari, was the reason why he is being persecuted by some disgruntled elements in the party who wanted him out as National Chairman.

Oyegun who spoke in Benin, Edo State, at an event organised in his honour by the Benin National Congress (BNC), said the only thing his adversaries could punish him for is his loyalty.

He said: “I grew up in an environment where bringing disgrace to the family is the worst thing you can possibly do. Even the family will be the first to disown you.

“In all my life, this is the circumstance that has conditioned me. I do not do things that will not make me sleep soundly at night. I do nothing that will appear as headline in any of the national dailies.

“I have been through several trials, but I have overcome them all. Why have I done so? Because at the end of the day, whether detailed or forensic examination, you will not find that your own Oyegun has done something dishonorable.

“And so, with all the hue and cry, at the end of the whole thing, when we sit down and ask, tell us what he has done, behold the whole situation fizzles out.

“The only thing you can punish him for is loyalty. Edo people are loyal. We look at something, we make sacrifices to ensure that those hands are upheld and neat.”

The APC National Chairman who urged Nigerians to be patient with the present administration in delivering the right and purposeful leadership for the country, noted that change takes time, consistence of applications, adding that Nigeria cannot afford to go back to the old days.

Earlier in his welcome address, the President of Benin National Congress (BNC), Mr. Aiyemenkhue Edokpolo, said Mr. Oyegun took steps to preserve the sanctity of the presidency, protected the interest of Nigeria as one and indivisible nation and defended the founding values of his party, when President Muhammadu Buhari went on medical vacation, during which the nation wet through series of frightening challenges.

Edokpolo who described Oyegun as a distinguished Benin and humble son of Edo State who has made landmarks in civil service and party politics, said the APC chairman deserved the honour, which he said was why the Benins decided to honour him as a role model.