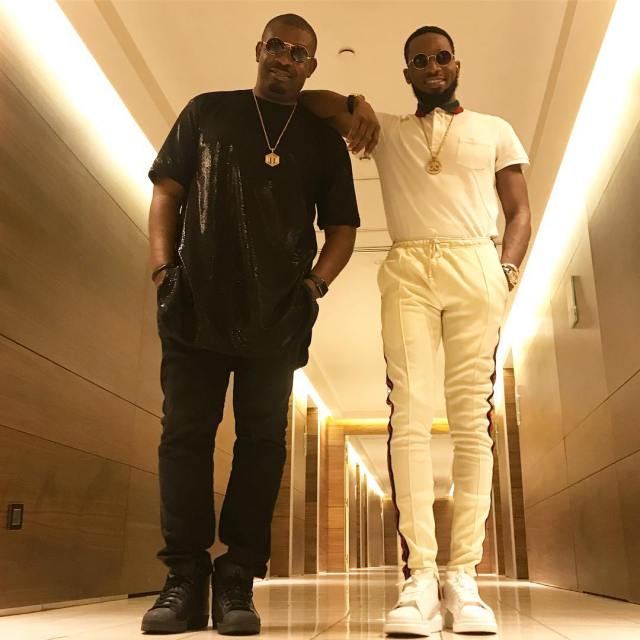 Davido had earlier announced that he would be offering a very ‘mad and loud’ surprise at his concert, which held at the Eko Convention center, Lagos, and he indeed kept to his words.

Davido, whose concert trended on Twitter, said it took him two whole months of effort to bring the moment into fruition.

The Mo’Hit stars sent the crowd into frenzy as they performed some of their hit songs. Dbanj also performed the band’s hit track, ‘Suddenly’ amongst many others.

The Mo’Hits crew which comprises of production mavin, Don Jazzy; The Entertainer, D’Banj; Vocal Powerhouse, Wande Coal as well as Dr. Sid, K-Switch, Ikechukwu and D’Prince, went on a split in 2012.

Don jazzy also posted a video of himself alongside his ex-band members, D’banj , Dr. Sid, and Ikechukwu singing joyfully in an elevator.

It is the first time Don Jazzy and D’banj would upload a video of themselves together on Instagram since their messy split five years ago.

This the first time the Mo’Hits is reuniting since their split.From Wizkid and Davido shocking fans with a surprise performance at Wizkid’s concert to Mo’Hits reunion at Davido’s concert, 2017 has become an important year in Nigerian music that will not be forgotten in a hurry.

Why they wanted me out as National Chairman of APC – Oyegun