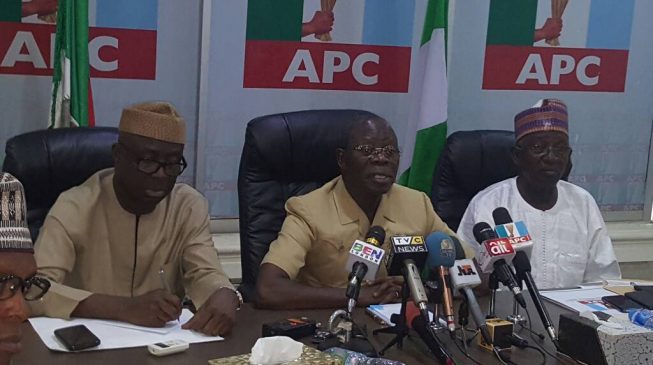 Speaking in Abuja on Thursday during a meeting with the APC caucus at the House of Representatives, Oshiomhole said the party would not dangle “dollars” or “automatic tickets” before aggrieved party members in a bit to prevent them from leaving.

Therefore, he said those who want to go to the opposition Peoples Democratic Party (PDP) should go.

“And then those who have done it, they are helping security agencies to explain. Pit latrines have been opened and people are vomiting left, right and centre. They are confessing like witches and wizards.”

APC has been revving up its efforts to maintain its stranglehold on the National Assembly since Tuesday when 37 of its members at the House of Representatives dumped the party after 15 (now 14) had done the same at the Senate.

However, there was some heartwarming news for it on Tuesday when Shehu Sani, the Kaduna Central senator, confirmed he would not leave the party but give “new surgeon” Oshiomhole the opportunity to “put the party back on track”.