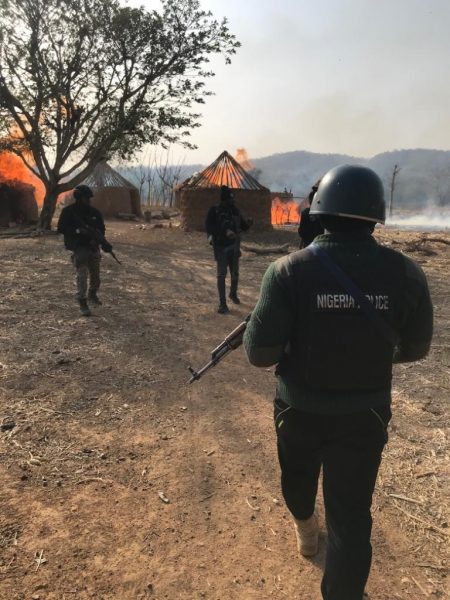 The Nigerian Police have given an update on the offensive carried out early Wednesday against terrorists and bandits under the umbrella Ansaru terror group, by giving an account on casualties and weapons recovered.
In a statement by DCP Frank Mba on Thursday, the police said they recovered 11 AK47 rifles, 730 rounds of live AK47 ammunition, 152 rounds of GPMG ammunition in two chains.

They also recovered 13 pairs of military camouflage uniforms, two cartons and 48 sachets of tramadol, four face masks, phones and other electronic gadgets which are now subject to forensic investigations.

The police acknowledged they lost an inspector attached to the special forces.

They however said their men killed two wanted commanders of the terror group. The commanders were identified as Haruna Basullube, one of the most wanted kidnappers/cattle rustlers in the country and one Bashir Leta, another notorious bandits’ commander.

Two other Ansaru commanders were arrested after being critically injured in the counter-terrorism operation on Thursday. They are Mallam Abba – Commander of Boko Haram camp in Kuduru Forest and Mofa.

Police also said 13 of their men were injured, along with the two pilots of the helicopter attacked by the terrorists.

“Thirteen other officers (made up of 2 SPs, 1 DSP, 4 Inspectors and 6 Sergeants) including the Pilot and Co-pilot of the Police helicopter, sustained different degrees of injuries and are currently receiving treatment”.

The killed officer was identified as Inspector Muhammed Abubakar. He died as a result of injuries sustained in the heat of the combat.

“Born on July 8, 1985, he was enlisted into the Nigeria Police on June 1, 2008 as a Constable and rose to the rank of Inspector of Police before his untimely death. As a member of the Special Forces, he participated in several successful Police operations and joint missions with the military in the fight against insurgency both in and outside the North-eastern part of the country”, the police said in a statement signed by DCP Frank Mbah on Thursday.

Meanwhile, the Inspector-General of Police, IGP M.A. Adamu has deployed crack detectives and special forensic investigators from the Force Headquarters to expedite investigations into the broad criminal enterprise of the Ansaru group and their associates.

While condoling with the family, friends, and professional colleagues of the late officer, the IGP restates the commitment of the Force to the safety of its personnel and the nation.

On Wednesday, the Special Operatives of Operation Puff Adder of the Nigeria Police backed by the Special Forces of the Police Airwing, in a daring offensive operation, stormed one of the largest operational camps of the Ansaru Terror Group located in Kuduru Forest, Birnin Gwari, Kaduna State .
The raid neutralized over 250 high-profile members of the Ansaru Terror Group.

The operation which commenced in the early hours of Wednesday, 5 February, was carried out by a combined team of operatives of Operation Puff Adder made up of the Police Mobile Force (PMF), Counter Terrorism Unit (CTU), Special Forces, Intelligence Response Team (IRT), Special Tactical Squad (STS) and Special Anti-Robbery Squad (SARS). The operation was necessitated by actionable intelligence linking terror and criminal elements in the super camp to series of terror-related violence, kidnappings, gun-running, cattle rustling and other heinous crimes across the country.