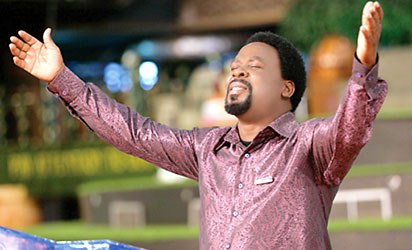 I watched an inspiring, courageous, brilliant and highly anointed young American lady by the name of Evangelist Angela deliver a powerful and earthshaking message about how Christian’s persecute other Christian’s in Nigeria and the importance of Church unity and Christian solidarity last Sunday.

I watched it on Prophet T.B. Joshua’s Emmanuel Television and it was preached at the SCOAN Headquarters in Ikotun, Lagos.
The message, which was titled ‘The New Wave of Persecution’, was really gripping and it also touched on how T.B. Joshua himself had suffered injustice and persecution over the years. I urge every believer to go to YouTube and listen to Angela’s sermon because it was not only deeply profound but also utterly inspiring.

There were however a few things that she left out which, in my view, ought to have been included. For example the fact that Joshua had his American visa cancelled in 2014 as a result of wickedness, envy and intrigue after the horrific bombing of one of his Church buildings which sadly resulted in the death of many of his members.

It is sad to note that not one Church leader expressed his or her condolences or comisserations to the Church or the Prophet after this tragic incident despite the massive loss of life. Instead it was the leaders of the Muslim community in Nigeria, including the Sultan of Sokoto and many Emirs, that did so!

Sadly, as if that were not bad enough, it got even worse! Some heartless Church leaders went as far as to petition the American Embassy to cancel the Prophet’s American visa and used this terrible incident as their excuse and attempt to justify it!
They did this even though it was clear that the collapse of the building was not as a consequence of any wrongdoing on his part but rather as a result of a brutal act of pure evil and premeditated murder and terror by those who wanted him discredited and his Church closed down.

It took the intervention of members of the American Congress, the State Department, numerous American Ambasadors, members of the American diplomatic corps and numerous American consular officials to resist the conspiracy and to ensure that his visa was restored.
I spoke with Prophet T.B. Joshua after listening to Angela’s message last Sunday and asked him why it was that he did not expose all this to the public in 2014.

I also asked him why it is that he always keeps quiet, refuses to defend himself and says nothing when faced with the unrelenting, shameful and relentless criticism, misrepresentation, false allegations, vilification and persecution that he has suffered from other Church leaders over the years.

This is all the more so given the fact that, in my view, such criticisms are borne out of nothing but pure envy.
He told me that he believes in the unity of the Body of Christ and that he did not want the Church to be divided hence his silence over the years.
He kept emphasising the fact that in order for us to succeed as Christian’s in Nigeria and save souls there must be love between and charity between Christians and Church unity. I was moved by his words but I must confess that I was not too happy about them.

The kind of insults, false allegations, fabrications and wickedness that this great man of God has been subjected to over the years by others is simply unacceptable and had he been a lesser man it would have broken him.
If God had not been with him he would have fallen long ago but instead he is going from strength to strength and his ministry has had a greater impact than that of any other Nigerian preacher in the international community.

From South America, to South East Asia, to the Korean peninsular, to Israel, to Europe, to Africa and to North America he is respected, revered and loved and his impact in terms of preaching and spreading the gospel of our Lord and Saviour Jesus Christ has been extraordinary and outstanding.

I have decided to write a book about this great man’s remarkable and inspiring life, his struggles, his challenges and the sort of things that he has been subjected to over the years very soon.

I will also expose the fact that the blowing up of his SCOAN Church building in 2014 was one of Nigeria’s most heinous and terrible acts of terror and I shall expose those who I believe were behind it.

T.B. Joshua is a humble, gentle, reticent, forgiving, kind and patient man who refuses to join issues with his detractors and enemies and who instead focuses on the work that God has called him to do.

I respect him immensely but I must confess that I do not share his disposition or inclination to say nothing when others seek to destroy and drag down. II I were in his shoes I would have hit them back long ago!
I guess that the fact that he has refused to do so is what makes him so special and so much better than those of us that can be best described as lesser mortals.

I am proud to call him my friend and brother, I wish him well in all his endeavours and I pray that the entire Body of Christ in Nigeria, together with our highly esteemed and reverred Church leaders, will have the humility, precence of mind and courage to learn from his shining example and Evangelist Angela’s inspiring message of love, peace, solidarity and unity.

Gov. Oyetola To Present Staff Of Office To Alapomu