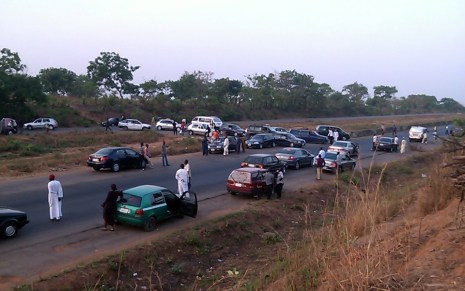 A Nigerian airline has launched daily flights between the capital, Abuja, and North-west Kaduna State, a fairly short distance for daily air service, after insecurity forced commuters to abandon a major road linking the two cities.

Misha Travels started operations on Monday with the slogan: ‘No fatigue, no fear’, appearing to be the first airline with a dedicated service to the route, which is less than three hours by road.

Tope Popoola, a management official at Misha Travels, said the route was admittedly too short to be taken seriously, but worsening road travel insecurity was the dominant basis for going into the business.

“We have paid careful attention to the crisis along Kaduna-Abuja Highway and we saw a huge market for air travel that is emerging from it,” Mr Popoola told PREMIUM TIMES on Thursday. “Most people would ordinarily be inclined to drive the two hours. It May look as if before you fasten your seatbelt, you are already in Abuja, but people are more concerned about their safety.”

The airline operates a Bombardier CRJ plane that could carry up to 50 passengers.

Some 10 years ago, Misha Travels’ calculation might have been dismissed as a meaningless adventure, but with road travels between Abuja and Kaduna now turning increasingly deadly, many have welcomed the move.

Hundreds of travelers have either been kidnapped or killed along the highway that connects Abuja to Kaduna, a major hub in the country’s north.

Deadly banditry has gripped the country for five years running, swirling even as government at both federal, state and local levels are repeating assurances that it would be curtailed.

Several prominent people, including federal lawmakers and top administration officials, have either had their vehicles shot at along the route by armed thugs or been abducted for ransom. People have been killed.

After some officials repeatedly dismissed the violence as a desperate act of a few jobless irritants, the Buhari administration later expedited the opening of a relatively modern rail line between Abuja and Kaduna.

The two-hour tracks became a relief for both residents and government officials alike when operation commenced in July 2016.

The railroad became a major fallback when aviation authorities closed Abuja airport runway for repairs in 2017. For six weeks, the Kaduna airport was the designated alternative and all Abuja-bound air traffic diverted there.

While the rail is evidently safer than road travel, there have been reported cases of attacks against passengers riding on the train. On January 25, passengers were ambushed near Kaduna’s Rigasa station shortly after they arrived on a train from Abuja at about 8:00 p.m.

Amid growing attacks especially in the north, President Muhammadu Buhari on Thursday chaired a meeting of national security members at the State House.

The meeting itself came a day after federal lawmakers demanded immediate dismissal of service chiefs, a group of four military chiefs whom the president has continued to extend their tenure despite mounting claims of their incompetence.

“The situation is getting worse everyday,” Mr Popoola said. “We know it might be tough initially for our business, but we will be happy we made the best decision in the long run.”

Previously, airlines had flown passengers from Kaduna to Abuja, but those were flights bound for Lagos.

Medview and other airlines once operated flights from Kaduna to Lagos via Abuja, but they were layovers and not direct departure and destination routes.

Yakubu Datti, an aviation consultant, told PREMIUM TIMES the Misha Travels could not have gotten it wrong with the level of insecurity along Abuja-Kaduna Highway.

“I believe it is going to be economically prosperous because there is a huge flow of people between the two cities and no one wants to travel by road anymore,” Mr Datti said. He described the move as the first direct commercial flight between Abuja and Kaduna that could spur similar decisions from other airlines.

“It could even mark the beginning of more cross-regional flights because of the worsening insecurity,” the expert said.
Source: Premium Times