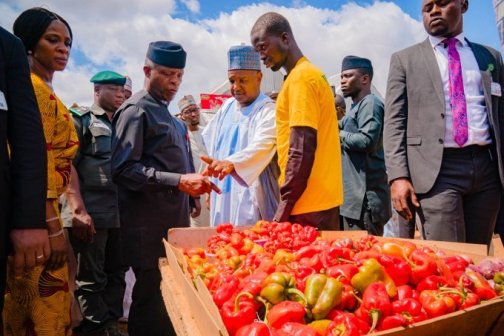 Osinbajo, with Governor Bagudu, speaks with a pepper seller in Kebbi[/caption]

Vice President Yemi Osinbajo said the Buhari administration will take 100 million Nigerians out of poverty in the next 10 years.

Osinbajo’ spokesman, Laolu Akande, in a statement in Abuja, said the vice president made the pledge on Thursday during a visit to Alhaji Muhammadu Bashar, the Emir of Gwandu in Kebbi State.

The vice president, who thanked the traditional ruler for hosting him, said he was in the state to “do a lot of things” one of which was to inaugurate the Micro Small and Medium Scale Enterprises (MSMEs).

He said he would also take a look at the new markets that had been rebuilt after the fire, and also ensure that some of the schemes being implemented to boost living standards were truly in place.. 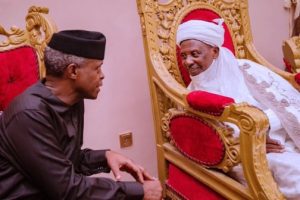 Osinbajo and the Emir of Gwandu

“ One of the very important schemes is what is called the Government Enterprise and Empowerment Programme, which has the TraderMoni and MarketMoni.

“The president’s desire for this programme is that every hard-working citizens of this country should be able to have some support from government, no matter how little their inventory.

“Today, at the market, I passed a woman who was selling vegetables and I asked her how much her whole inventory was, the whole thing was N500; it is for such people, such petty traders, that the TraderMoni N10,000 is meant, so that they can buy more.

“The President has promised that by the grace of God, we are going to take 100 million Nigerians out of poverty in the next 10 years.

“I believe very strongly that we are going to achieve that, but we can only achieve it with the able support of the state governments,’’ the statement quoted Osinbajo as saying. 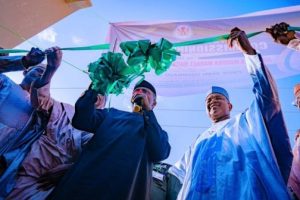 We will defeat Atiku, PDP at Supreme Court, Oshiomhole boasts