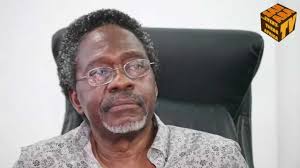 Akin Oyebode, Professor of International Law and Jurisprudence, University of Lagos has warned that if drastic measures are not put in place urgently to contain it, corruption might ultimately result in the mortality of Nigeria as a nation-state.

Oyebode spoke on Thursday at a roundtable organized by Socio-Economic Rights and Accountability Project (SERAP) in collaboration with the National Endowment for Democracy (NED), in Ikeja, Lagos, Southwest Nigeria.

Delivering a paper on “Strategies for Mobilizing Mass Action to Demand Anti-Corruption Reforms and an End to Impunity for Grand Corruption in Nigeria” Oyebode  insisted that “mass action by the citizens is urgently needed to put pressure on authorities to end impunity for grand corruption in the country.”

According to him, “The people must be enlisted in the war against corruption. Nigerians should start anti-corruption clubs in schools, radio jingles should be put in place to fight corruption, carry placards, go outside, organize sit ins like SERAP is doing presently, Nigerians should be mobilized against corruption and now take their destiny in their hands. The fight should not be left alone to organizations like SERAP and when the State want to attack organizations like SERAP, the masses should fight for them.”

Oyebode also said that, “The recent attempt by the National Assembly with the NGO bill to control, monitor and eventually sequester CSOs all because of the excuse that some CSOs are corrupt should not be allowed. Cutting off the head is not the cure for headache, the bill is an overkill. If they cage organizations like SERAP, who will fight for the masses. The government do not want anybody to act as impediment to their thievery activities.”

The Attorney General of the Federation and Minister of Justice, Abubakar Malami SAN who was represented by his Senior Assistant, Abiodun Aikomo said, “The disconnect between our prosperity and where we are is corruption. We have to be patriotic, only Nigerians can do something about corruption. To file paper in court, you have to shake body. Corruption as unfortunately attained legitimacy in Nigeria, we are all encouraging corruption that is killing us. Imagine a million citizens fighting against corruption, we have a government committed to the fight. Let us all fight it and shun greed”

Human rights lawyer, Femi Falana SAN in his contribution said that, “We must stop our lawyers from terrorizing our courts and judges. We must get our judges to take charge of their courts.”

According to Falana, “Religious leaders should stop confusing our people. Our churches and traditional rulers should stop praying for thieves. This is how low we have sunk. What are we as individuals doing to stop these politicians, let’s start with Lagos, let’s start asking our legislators how much they are being paid for doing what? Let our church stop conferring honours on criminals. Also our universities should be encouraged to join in the fight.”

All participants committed themselves to promoting an end to impunity for grand corruption in the country by among others ensuring the effective prosecution and jailing of high-ranking corrupt officials and securing recovering of stolen public assets.

Five things Women do that could Turn a man Off