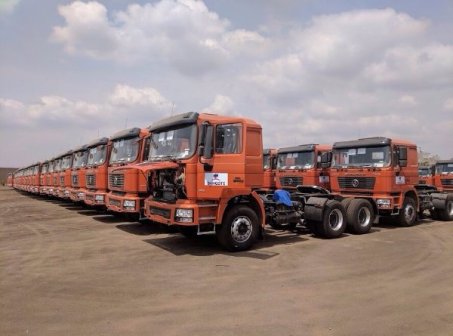 Dangote Group has in the last five years invested over N63bn in the South East with the purchase of over 3,500 units of locally assembled Shacman trucks at the production plant of Anambra Motor Manufacturing Company (ANAMMCO), Enugu.
The order was delivered over a period of five years after Dangote Group signed an agreement with Transit Support Services (TSS), a subsidiary of ABC Transport PLC.

The partnership started in 2016 with an initial order of 350 Trucks by Dangote and as at today no fewer than 3,500 trucks have been supplied to Dangote from the ANAMMCO plant. Each of the trucks costs over N18m.

Apart from being the single largest buyer of the locally assembled trucks, the patronage by Dangote Group has revived the ANAMMCO plant, a vehicle assembly facility commissioned in 1980 by the Federal Government in partnership with Mercedes Benz.

Speaking at the weekend after a tour of the expansive ANAMMCO plant which was filled with Dangote trucks undergoing semi knocked down (SKD) production, Chairman of TSS, Mr. Frank Nneji said if not for Dangote’s magnanimity and his commitment to empower local manufacturers, the ANAMMCO plant would have remained perpetually moribund.

According to him, the revival of ANAMMCO was made possible by Dangote’s patronage “in identifying a plant that has capacity in the south-east, in Enugu to give us the opportunity to produce trucks locally instead of importing them.”

He said, “And of course you know what it does for us here in the South East. For more than seven years this plant was shut down. There was no activity here until we made an agreement with Shacman group and started skeletally. But we were only to start full step production when we offered the logistics solutions to Dangote and the production facility of ANAMMCO way back in 2016. That was the time we signed agreement for the first 500 units of trucks.”

Nneji who added that 90 per cent of trucks produced at ANAMMCO plant were for Dangote said the patronage has also brought back Onne Port in Rivers State which he disclosed has handled over 3000 containers since ANAMMCO was resuscitated.

He said, “ANAMMCO like I told you is a plant that was commissioned in 1980 by the Federal Government, it used to be in collaboration with Mercedes Benz. Of course you know what has happened to the auto industry. We had gone down over a long period prior to the inception of the automotive policy.

“What we are saying in ANAMMCO coming back is actually as a result of this auto policy. This is one of the benefits. And the second thing is the benefit of Dangote’s patronage in identifying a plant that has capacity in the south-east, in Enugu to give us the opportunity to produce trucks locally instead of importing them.

“And of course you know what it does for us here in the South East.

For more than seven years this plant was shut down. There was no activity here until we made an agreement with Shacman group and started skeletally. But we were only to start full step production when we offered the logistics solutions to Dangote and the production facility of ANAMMCO way back I 2016. That was the time we signed agreement for the first 500 units of trucks.

“What this initial capacity surge did was to ensure that all the staff of ANAMMCO who had been at home had to come back to work. Some local suppliers, lubricants, electrolytes and the rest of them also had to come back to doing business. And it goes even further than that because we are in Enugu, we used the Onne Ports to bring in these goods. You know many people are complaining that Onne Port is moribund, no good is coming. Of course we directed all the containers here and from 2016 up till now courtesy of Dangote, the Onne Port has handled more than 3000 containers coming to this place.

“So you see how we can spur capacity by utilizing our local capacity that is available and this is courtesy of Dangote and the patronage and each time we had approached Dangote, we said, ‘look if you are going to do this number of trucks, it is important that the Shacman apart from its quality, we are also representing a firm that has production capacity in the South East in the stake of ANAMMCO.’ That is how Dangote is keeping the South East automobile sector working.

“According to the National Automotive Policy, Enugu and Nnewi has been designated as the automotive centre for the South East in this axis. This is because of the stay of ANAMMCO over a period. They have acquired a lot of technical capacity. There is also a training school that produces technicians, training young school leavers here.

“So this is what we are doing here. This place is busy producing quality trucks with Dangote as the largest single patron. 90 per cent of the trucks produced here are for Dangote.

“Totally here we have done 3,500 units for Dangote. Additionally the trucks used at the refinery are also Shacman trucks. Because of the quality of Shacman trucks Dangote also patronizes that for the refinery.”

General Manager, Media, Dangote Group, Mr. Sunday Esan said the group is satisfied with the Shacman Trucks churned out from Onne Ports, adding that the partnership would last for a long time as the group continues to expand across its various business segments.

Esan added that as the Dangote refinery comes on stream, the group would require more trucks hence the sustained relationship with TSS/ANAMMCO.

According to him, the massive investment in the south-east is contrary to the assumption that Alhaji Aliko Dangote, the President/CEO of Dangote Group is not patronizing local manufacturers.

“This is why he agreed we should come and see how ANAMMCO plant has come alive, the impact he has made in the country and the employment this patronage has generated,” he said

Gov. Matawalle in alliance with Yarima to join Zamfara APC