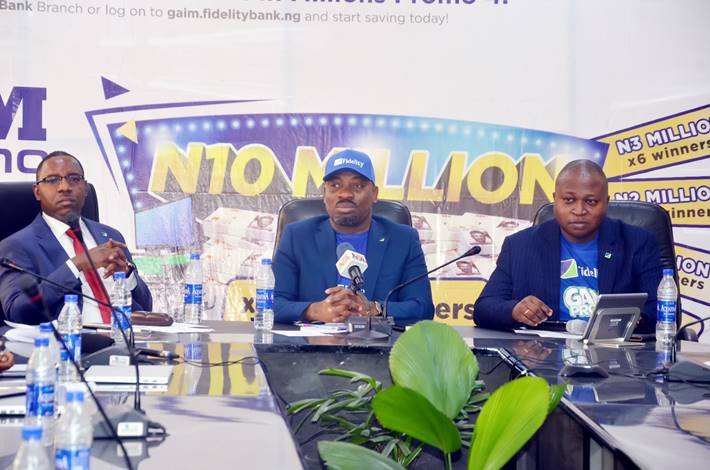 Twelve lucky customers have emerged millionaires in the fourth monthly and second bi-monthly draw of the Get Alert in Millions (GAIM) promo season 4.

The electronic raffle draw, which held at the head office in Lagos, was witnessed by the relevant regulatory bodies including the National Lottery Regulatory Commission (NLRC), Lagos State Lotteries Board (LSLB) and Federal Competition and Consumer Protection Commission (FCCPC).

The bank, in a clear demonstration of its steadfast commitment to support initiatives that enrich the lives of its loyal customers even in times of economic uncertainties, rewarded lucky customers with cash prizes in the categories of N3 million, N2 million and N1 million.

Speaking at the event, the bank’s CEO, Nnamdi Okonkwo noted that the bank had organised nine (9) savings promo in the last 12 years. Okonkwo was represented by the Divisional Head, Operations, Fidelity Bank Plc, Martins Izuogbe.

Whilst stating that a total of N18 million and 18 consolation prizes will be given out in the fourth monthly draw, Okonkwo pointed out that our bank has created viable opportunities for Nigerians to get better return on savings in view of the changing economic landscape.

He said, “Currently, savings gives better yield than other instruments and what we are doing is in line with the CBN’s directive on financial inclusion and create better value for our customers. To this end, we set aside a total of N120 million as gifts to our customers as they participate in this promo.

It is worthy to note that by the end of today’s draw, we would have given out a total of N68 million in cash and 72 consolation prizes of fridges, TV sets and power generating sets to over 123 winners. We expect more winners to emerge in subsequent draws as we still have a total of N52 million and several consolation prizes yet to be won”.

Shedding light on how people can qualify for the draw, the bank’s Divisional Head, Retail Banking, Richard Madiebo, stated that both existing and new customers can win by simply topping their account with N10,000 for existing customers or someone opening a new account and building it up to N20,000.

NKANANG: THE DEPARTURE OF AN INSPIRATIONAL TEACHER