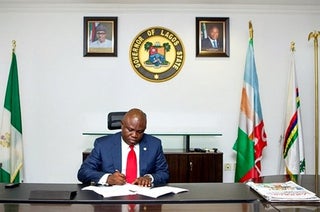 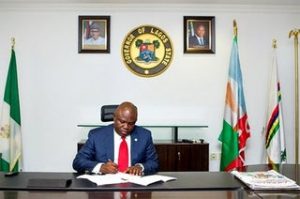 The Lagos State House Assembly on Tuesday set up a committee to investigate the purchase of 820 buses by the administration of former governor Akinwunmi Ambode in the state.

The House said it was important to investigate the purchase of the 820 buses out of the 5,000 buses proposed by Mr Ambode for mass transit in the state, but which was purchased despite objection by the House of Assembly.

In a motion, Gbolahan Yishawu (Eti Osa 2), noted that at an Executive/Legislative parley at Golden Tulip in FESTAC in September 2017, Mr Ambode informed the lawmakers that 5,000 buses would be bought by the state government.

The lawmaker stated that the executive proposed to spend N17 billion to purchase the buses in the 2017 budget, but that this was not approved by the Assembly.

“In the 2018 and 2019 budgets, the state government proposed N24 billion and N7 billion respectively, but these were not approved.

“The state government still went ahead to import 820 buses at N7 billion, and out of that, 520 are still awaiting clearance at the ports,” he said.

The move by the lawmakers to probe Mr Ambode is likely to complicate matters for the former governor who is facing another probe.

Last week, operatives of the Economic and Financial Crimes Commission searched his residences in Ikoyi and Epe as part of an ongoing corruption investigation.

Inflated project
During Tuesday’s plenary, Mr Yishawu said the House was worried that 520 buses were still awaiting clearance from the bonded warehouse and the Port, waiting to be cleared and that they were purchased with taxpayers’ money without approval.

He urged the House to set up an ad-hoc committee to investigate all the issues relating to the purchase of the buses.

He also asked that the House should investigate the cost of the purchase of the buses and other issues surrounding it to prevent a reoccurrence.

“The state government requested waivers for the importation of the buses and it was not granted.

“N45 billion would be spent on the total purchase of the buses and we need to prevent such an occurrence in the future,” he added.

In his submission, the speaker of the House, Mudashiru Obasa, said the House needed to prevent waste because the expenditure had been done.

According to him, “the vehicles are in the ports and they have been there for almost a year.

“The state will continue to suffer if we allow the buses to stay in the ports.

“We should be the regulators of transporters, the state should not operate the buses.

“How much are we giving the buses out should be addressed. We should get the buses to the roads and save the state from further wastes.”

The House subsequently set up a committee headed by Fatai Mojeed (Ibeju Lekki 1) to look into the matter and report to the House in due course.

The speaker directed the committee to invite the Accountant General of the state, Permanent Secretary of the Ministry of Transport, and others that were involved in the purchase to state what they knew about it.

He also told them to invite the current Commissioner for Finance, the Managing Director of LAMATA and others.

In his contribution earlier, Yinka Ogundimu (Agege 2) stated that the House needed to investigate every transaction that had to do with the procurement of the buses.

He added that It would become a bad precedent if the House didn’t do anything about the matter.

“A huge amount of money still needed to be paid on the purchase of these buses. Whoever has erred should be brought to book,” he said.

In his part, Rasheed Makinde stated that it was obvious that the last administration did many things wrong in awarding contracts.

Mr Makinde stressed that some of these included Visionscape and the proposed fourth mainland bridge.

“The House rejected the proposal on the buses, yet they went on to spend N45 billion on the project.

“Since we did not approve the contract expenditure is null and void, so the money should be refunded.

“The Account General of the State, Procurement Officer and the Permanent Secretary of the Ministry of Transportation must be called to speak on the matter,” he said.

In his view, Rotimi Olowo (Shomolu 1), stressed that the provision of the 1999 Constitution in Section 120 has been flouted with the purchase.

“They told us that they wanted to start a pilot project, yet they went ahead with the project.

“Can we still wait for the vehicles to be in the port and attract demurrage.

“The incumbent governor of the state should ask for waivers from the Federal Government so that we could retrieve the vehicles from the ports,” he said.