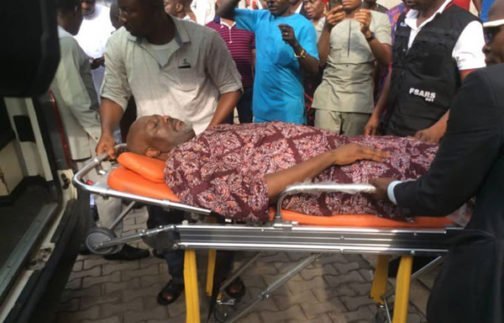 The police on Wednesday re-arrested embattled Senator, Dino Melaye in court after the magistrate granted him bail.

The senator was arraigned before a Magistrate’s Court in Wuse Zone 2, Abuja amid heavy presence of police officers.

He was arraigned on charges bordering on his alleged escape from a police vehicle in Abuja on April 24, 2018.

The presiding magistrate, Mabel Segun-Bello, granted him bail in the sum of N90m.

Punch quoted Melaye’s lawyer, Mr. Nkem Okoro, as saying that his client met the bail conditions granted by the court but the senator was re-arrested by the police on the court premises.

“He met his bail conditions but the police decided to re-arrest him on the excuse that they were taking him to Lokoja tomorrow morning,” Okoro said.

Melaye laid on a stretcher when he was produced in court in a police ambulance with registration number NPF2214D on Wednesday.

Over 200 policemen were deployed to the court on Wednesday.

They left the court premises in a convoy which comprised the ambulance conveying Melaye at about 4.20pm.

In the First Information Report filed by the police against him, he was accused of intentionally breaking the side windscreen of the bus conveying him and jumped out from it.

DR CHRIS OKAFOR EMPOWERS 108 WIDOWS WITH N200.000 EACH AS PART OF HIS BIRTHDAY GIFTS