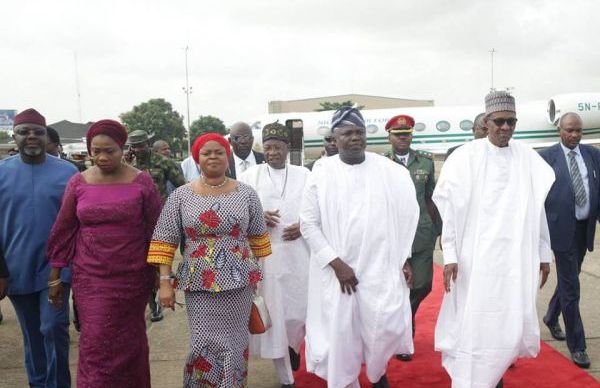 The group also pegged the cost of “the jamboree called Presidential visit to the state by President Buhari-led Federal Government at N4.7b,” saying the sum could have been put to better use rather than embarking on the visit, which the group said achieved little or no results both for the state and the government at the centre.

Appraising the state of things in the state, the Save Lagos Group has stated that the only way peace would rein in the state was for the State Government to repeal all laws that have been enacted by the state’s House of Assembly, which are draconian and against the interest and wellbeing of the people.

Convener of the Save Lagos Group, Comrade Adeniyi A. Sulaiman, in the statement made available to newsmen in Lagos on Saturday reasoned that it was shameful for the president to have left the seat of power in Abuja to commission a mere motor park.

“How do you justify a situation, whereby the Akinwunmi Ambode led government would seek to advertise its non-performance by dragging the president of the country to Lagos to commission a motorpark,” Sulaiman asked.

While carpeting both governments in the state and at the centre, Sulaiman in the statement, wrote that “I am not aware that the president is a member of the National Union of Road Transport Workers (NURTW) or whether he has been appointed as their life patron to be dragged into mundane issue of commissioning a motorpark.”

According to Sulaiman, President Buhari should have restricted his itinerary to the birthday event of a chieftain of the party, Senator Bola Ahmed Tinubu, which was of course was his main purpose for embarking on the visit than to drag the office of the president to the not too dignifying event that has come to serve as a source of ridicule and embarrassment to the country before the ever discerning international community.

Sulaiman also faulted the security cordon that was put in place by the various security organisations at the behest of the Nigeria Police Force, saying the development brought so much untold hardships to the people of the state who had to trek a long distance from one point to the other within the metropolis.

“During the two days that the visit lasted, many of our people were subjected to untold hardships. Apart from the fact that many of them were left with no option but to trek long distances to their destinations, some of them were even brutalised by operatives who hid under the security cordon to perpetrate evil on the citizens who tried to use public facilities. This is totally uncalled for, why would state shutdown commercial activities in the event of a presidential visit? This is barbaric and wicked and we demand immediate public apology from the state government and the leadership of the Lagos State Police Command for this unwarranted sufferings of the people whose rights were infringed upon,” he said.

Appraising the leadership style of the current government in the state, the group accused the Ambode led government of trying to entrenched fascism in the state, saying the Save Lagos Group and its affiliates would resist the descent of the governance in the state to fascism.

“We are afraid that an emerging fascist style is gradually becoming the order of the day in Lagos and we will alongside democratic and progressive forces resist it. How do you justify a situation whereby the state government decided to use state apparatus of coercion such as the Nigerian Police Force to prevent its citizens from protesting and moving around freely during the so-called presidential visit?” Sulaiman asked rhetorically.

On the various laws that have been enacted by the state government, Sulaiman on behalf of the group called for a reversion to status quo by a total repeal of the laws, which he described as inimical to the wellbeing and progress of the teeming people of the state whom he stated are already at the wrong end of the social economic rung occasioned by abject poverty, misery and want.

“We are calling on the state House of Assembly not commence all the right processes that would lead to the repeal of some of the laws of the state government relating to Land Use, Environment as well as procedures for securing bail to suspects on trial. We have appraised the contents and the intendment of the laws and we have come to the irrevocable conclusion that they will not serve the interest of the people but rather serve and advance the interest of some godfathers in the state,” he said.

He added that the state government should desist from illegal and wicked public advocacy regarding the said laws forthwith, adding that failure to listen to the cries of Lagosians would be met with stiff resistance as earlier stated in past press statements that the group has issued to the media.

“We are using this medium to once again reiterate our opposition to the laws and we wish to state that with the impending end to the celebration of the Easter festive season and the observance of Rahjaab fasting by both Christian and Muslim faithful, we are more than ready to begin our two month occupation of the Lagos State Secretariat in Alausa, Ikeja. The 2012 Occupy Nigeria at the Gani Fawehinmi Park in Ojota would be a child’s play when we start,”

“This should be an alert to all those concerned that this is no empty threat, we are already in talks with relevant stakeholders such as the Nigeria Bar Association (NBA) and other professional groupings, political parties such as the National Conscience Party (NCP), Socialist Party of Nigeria (SPN) a faction of the ruling All Progressives Congress (APC) in Lagos.

“We are also in talks with the labour trade centres such as the Trade Union Congress (TUC), the Nigeria Labour Congress (NLC), United Labour Congress (ULC) and faith based organisations such as Christian Association of Nigeria (CAN), NASFAT, QUAREEB, TIJANIYYA, Muslim Students Society of Nigeria (MSSN) and The Muslim Congress (TMC) and the Joint Muslims Action Front (JOMAF),” he said.

You are gutless, treacherous bastard’ – Fani-Kayode attacks Oluwo for converting to Emir