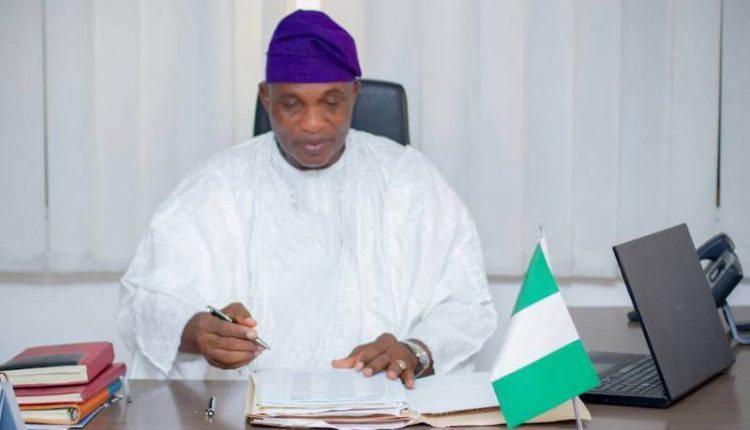 Alhaji Moshood Adeoti, the Secretary to Osun Government, has resigned his appointment and defected to the Action Democratic Party(ADP).

Adeoti was one of the 17 All Progressives Congress (APC) aspirants in the July 19 primary conducted by the party.

Adeoti, who announced his withdrawal a day before the primary, eventually scored 128 votes.

In a letter addressed to Abdul’aziz Yari, the Chairman of APC Primaries Committee and governor of Zamfara, Adeoti alleged that he was withdrawing because the primary had been skewed to favour Mr Gboyega Oyetola, the Chief of Staff to Gov. Rauf Aregbesola.

In his acceptance speech after a primary held at the ADP Secretariat on Monday in Osogbo, Adeoti urged the party members to support him in winning the Sept. 22 governorship election.

Adeoti said he was committed to executing the ADP ideals as contained in its manifesto.

He also said he had acquired experience as a “ grassroots politicians who had passed through virtually all stages of political leadership as councillor, local government supervisor and party administrator and later Secretary to State Government.’’

” I present a sober, deep and solid experience critically needed to lead a people-centred and masses-oriented administration as the governor of Osun State,’’ he said.

Earlier in his speech, Mr Dozie Ike, the ADP Electoral Committee Chairman, urged all members of the party to support Adeoti to win the election.

Also speaking, Mrs Lynn Olisa, the Secretary of the Electoral Committee, said 13, 400 party members were accredited for the primary while 13,367 voted.

Olisa said Adeoti, the only aspirant of the party, scored 13,324 votes, adding that 43 votes were voided.