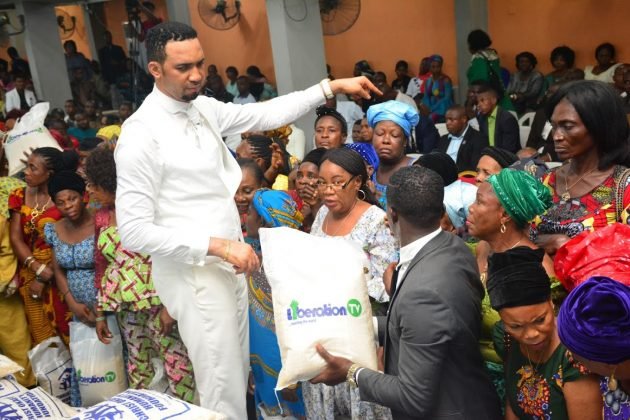 What next after this?

We have a mandate to reach one billion souls and part of this mandate is that we would go from nations to nations to preach the gospel and by the grace of God, we have reached about 46 Nations of the earth and we are not relenting. It is the grace of God. I am privileged to be among those called by God to this great commission. Again, we are going to be reaching the less privileged during our Thanksgiving. This is part of our lives, we do this everyday. We are going to empower about 2,000 widows, orphans and the less privileged. We are going to give them bags of rice, money, garri and other cooking materials. We believed in doing this because the Bible supports it. The government has failed us so, we Church has the onus on us to assist our people. The Bible says the government shall be upon his shoulders so, what we are doing is to go from grace to grace as well as reach more people.

Looking at the killings going on in several parts of the nation mostly that of the catholic priests recently, would you say Church is quite not doing what it supposed to do?

It not right that the church is quite. It is very worrisome but, the battle is not only physical but also spiritual. That we are fighting from the spiritual point of view doesn’t not mean we are quite or that we are not doing anything about the situation. According to the Bible, when Peter was arrested, the church didn’t make noise but noise was going on in the spiritual realm. And as a result of that noise, there was a response that brought Peter out of the prison. That is what we Christians are doing right now. You know the government we have now is the one that is ready to crush anyone who speaks against them so, we have to deal with such situation diplomatically and continually pray for the country.

President Buhari was alleged to have called Nigerian youths lazy. Do you share his opinion?

If the President has said that then, he’s not right. Because you guys are youths, you are hardworking, that is why you are here. This is past 10 midnights and you are here because you are hardworking. So, for him to have said that is bad. It is because there is no job and that those who got jobs are not doing the right one, that is why you have insecurity in the country. It is only in Nigeria that will have police manning the VIP’s, in other countries they move about freelyand it was because there was insecurity in our country due to lack of job. Most of these guys who perpetrate evil are graduates andintelligent people but, because there’s no job they go into kidnapping. Someone who does that is not a lazy person. Fraudsters andthose in 419 businesses have brain, they are intelligent but because their intelligence is not properly channeled, that is why we can say they are lazy. Someone that can convince somebody to pay millions of naira is not a lazy person but, the intelligence is channeled properly, they would use it for the good and the betterment of the nation. So, the government has not done well. I don’t think the youths are lazy but, the government made them so.Your spiritual children blessed you with a brand new G-Wagon, did you see this coming and how will you describe this kind gesture?Oh! I can’t thank God enough. I appreciate them and this one will ginger us to do more because, when you are playing football and you have supporters who are cheering you up, it’s for you to do more. So, by this kind gesture it means they are saying we are behind you, go ahead and do more and I’m telling you that we are going to take moreterritories.

The Chris okafor foundation is empowering over 2,000 widows across the globe, can you tell us why you took this decision and it is coming at your birthday?

The body of Christ has gone beyond the prayer and deliverance alone, because if you deliver without the physical deliverance the whole process is not completed, so the deliverance is not complete, if you deliver a man who is jobless to go into the world and make exploit, I did not think it will go well always, but in some cases if you deliverand empower such person, heaven in its self rejoice, so we in liberation city knows the important of time and season. So we decided that if the women (widows) are empowered in directly the nation isempowered. Also part of my vision is to ensure that the less privileged and the widows get the same privilege from God, so we decide to empower them. Meaning one of our mandate is to continually put smileinto the less privileged in the society.

DR CHRIS OKAFOR EMPOWERS 108 WIDOWS WITH N200.000 EACH AS PART OF HIS BIRTHDAY GIFTS