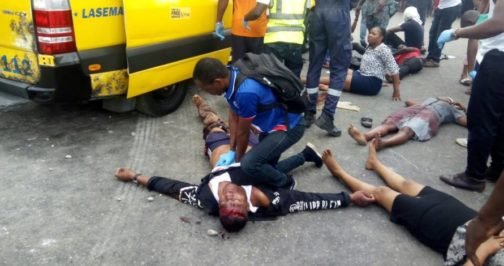 The incident occurred at about 8:00 a.m. at Ilasa, along the Oshodi-Apapa Expressway.

Among the deceased was one Odejayi Adebola, who is said to be in his 30s.

Our corresThe Nation reports that a truck heading towards Oshodi and on top speed developed mechanical faults and rammed into the pole.

Consequently, the pole fell on the commercial bus and killed four people on the spot.

He said: “The accident occurred at about 8:00 a.m. A bus parked off the road and was loading passengers. Suddenly, a tipper on high speed coming from Cele axis just rammed into a signpost. When the tipper hit the pole, the pole fell on the bus and four people were killed.

“Policemen from Ilasa Division and officials of the Lagos State Emergency Management Agency (LASEMA) arrived the scene and evacuated the injured to the hospital.“One Odejayi Adebola was among those who died. His colleagues came to the scene. They said he worked with a marketing firm. All those who died were men.”

He said: “The LASEMA Response Team (LRT) received a distress call through the emergency toll free line at 8:26 a.m. They were told of an accident by Ilasamaja inward Oshodi and deployment was made to the scene.

“Preliminary investigation carried out by the LRT at the scene of the incident revealed that an empty lorry (iveco) with registration number MEK695XA hit an overhead signpost which subsequently fell on a commercial coaster bus coming from behind.

“Seven adult victims comprising four females and three males were rescued but they had severe injuries. They were stabilized by the LRT and subsequently transfered to Mushin General Hospital for further treatment.

“Three adult males lost their lives and were later handed over to officials of the State Environmental Health Monitoring Unit (SEHMU) to be transferred to the mortuary.

“Motorists are urged to ensure they drive within the approved speed limit, watch out for road signs and other impediments to avoid unnecessary loss of lives.