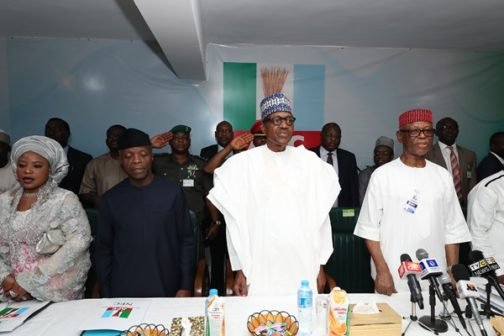 National Chairman of the party, Chief John Odigie-Oyegun, announced this on Wednesday in Abuja at the end of a three-hour meeting between governors elected on the party´s platform and the National Working Committee (NWC).

The party had on Tuesday, constituted a 10-member technical committee headed by Gov. Simon Dalung of Plateau to advise its leadership on the way forward on the tenure issue.

The party had on Tuesday, constituted a 10-member technical committee headed by Gov. Simon Dalung of Plateau to advise its leadership on the way forward on the tenure issue.

This followed President Muhammadu Buhari´s recent opposition to NEC’s approval of tenure extension for the NWC and all executive committees of the party at all levels across the country, made at its meeting on Feb. 27.

Buhari had said at another meeting of NEC in Abuja on March 26 that the NWC’s tenure extension decision was illegal and unconstitutional.

The NEC had extended the tenure of the Odigie-Oyegun-led NWC and other executive committees by one year, starting from June.

The president had explained that the decision was causing acrimony within the party, with some members not comfortable with the matter, dragging the party to court.

´´The Governors and the NWC of our party decided to sit and look at the issues that were seemingly dividing us.

´´I want to say to you with absolute satisfaction and pride that all the issues that you have been commenting on have been completely and totally resolved,’’ Odigie-Oyegun said.

He said that the technical committee constituted to look into the issue would submit its report latest on Thursday to enable the NEC to look at it.

´´The Chairman of the technical committee has reported that his report will be ready latest this evening or by the very most, early tomorrow morning.

´´This report will be placed before NEC on Monday and appropriate decision will be taken and thereafter, we shall announce to you the further steps we are going to take,´´ he said.

The chairman, however, added that the party´s next steps would depend on its NEC considering the committee´s recommendation.

He assured that the APC was back as one united and focused party, strongly behind Buhari and its executives across the states.

Commenting on the issue, the party’s National Publicity Secretary, Malam Bolaji Abdulahi, told newsmen that final decision on the tenure extension issue was with the party´s NEC.

´´It is left for the NEC to decide, and if the committee recommends that the position of NEC should be maintained, then there will be no need for an elective convention.

“Then, the president and those who are concerned that the decision we have taken is correct or not, will have more confidence in the position of the party.’’

The APC spokesman, however, said that if the technical committee recommended that congresses should be held, the party´s NEC would consider that.

Governors elected on APC platform, had at a meeting with Buhari on Tuesday unanimously agreed that the party should hold a congress to settle the extension issue and others.

CODELAGOS: 15,000 TRAINED AS AMBODE APPROVES NEXT PHASE OF INITIATIVE