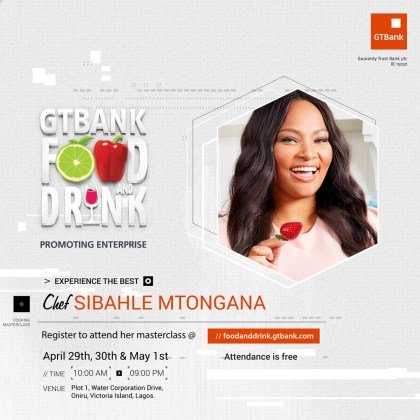 Food Network star and award winning chef Sibahle Mtongana will be at the 2018 GTBank Food and Drink Fair to facilitate a Masterclass how to succeed as an African chef on the global stage.

Best known for the popular Food Network show, Siba’s Table, Sibahle started exploring the world of food during her early years in East London when her Diabetic mom encouraged her to take a healthier and natural approach to cooking. This led her to completing a degree in Food and Consumer Science at Cape Technikon after which she worked for the Drum Magazine, later rising to the position of Food Editor.

In 2017, Sibahle won 3 international awards at the Gourmand World Cookbook Awards in China and was recognized by US Film and Television Awards for her cooking show Siba’s Table. She is also passionate about ending global hunger and actively participates in global campaigns such as Rise against Hunger for which she is a Global Impact Ambassador.

If you would like to attend Sibahle’s Masterclass at the 2018 GTBank Food and Drink Fair, which holds on Sunday, April 29th,

Festus Keyamo Standing Before A Broken Mirror; The 2019 Debacle.