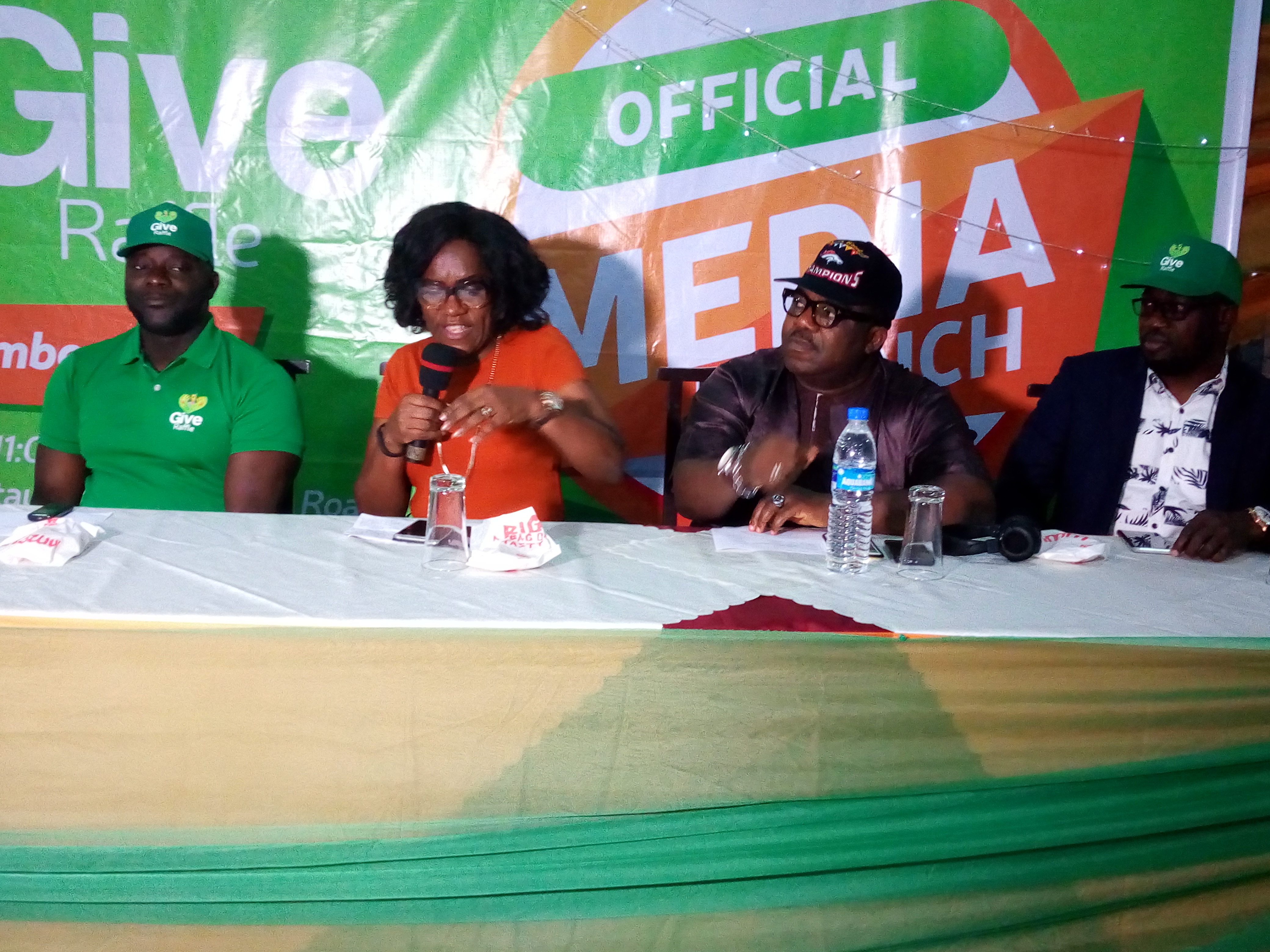 The official media launch of a unique and innovative online game, Give Raffle was held Saturday, December 1 at Golden Gate Restaurant, Ikoyi, Lagos. Give Raffle Nigeria is the registered trading name of Hesges Synergy Nigeria Limited. Give Raffle is a game, where players play to win a grand prize of a brand new car monthly and also win daily giveaways including mobile phones, television sets, microwave and generators, water dispensers among many others.

Hesges Synergy Nigeria Limited is licensed by the Lagos State Lotteries Board to operate a public online lottery within Lagos, Nigeria. The company has its Corporate Headquarters in Lagos State. It however, seeks to extend its operations to all the States in Nigeria where lottery is permitted in the coming years.

According to Barrister Adetunji Adegboyega, CEO, Hesges Synergy Nigeria Limited, promoters of the GiveRaffle, the company has been licensed by the Lagos State Lotteries Board to operate both the lotto and public online lottery activities. He also disclosed that the company is starting with the GiveRaffle, which he said was aimed at making life more meaningful for everyone.

According to him, the raffle is usually a month long and it is called Season while everyday of that season, there is a daily giveaway called Round.

“A round is a daily draw (Monday to Saturday) starting by 8:00 am till 6:00pm after which a draw will be done. Various household items will be won at a price of N200 per ticket. The season draw is the biggest where the grand prize of a car will be won after the end of the month draw at a token price of N500 per ticket. The N500 ticket also automatically qualifies buyers for daily draws as a double target draw,” he explained. GiveRaffle has Paystack and GT Mobile App as major payment processors while tickets can also be purchased via web (www.giveraffle.com), and through GiveRaffle certified agents all over Lagos.

According to Adegboyega, transparency is assured because Hesges Synergy Nigeria Limited’s operations are based on well tested lottery algorithm and proven technology. The company holds itself to the highest ethical standards of operation and acts always in accordance with the relevant Nigerian laws, guidelines, regulations and the international best practices in the lottery business. Also Hesges Synergy Nigeria Limited is committed to abiding by the statutory requirements as to payouts.

Give Raffle Nigeria is a platform where players play to win a grand prize of a Brand New car monthly! There are also many daily and weekly prizes to be won. Prizes like televisions, laptops, fridges, mobile phones, microwave ovens, blenders, and so much more are up grabs with a single auto generated ticket.  Give Raffle Nigeria rewards patronage and referrals by giving bonuses and points which can be used to buy raffle tickets. With Give Raffle, winning is made easy!

Give Raffle Nigeria has shops in key areas and locations close to customers for online play, for redemption of prices and enquiries.  The company is constantly evolving and remains focused on ensuring that customers get the best possible experience with Give Raffle Nigeria. Give Raffle also welcome meaningful and constructive feedbacks from highly esteemed customers, partners and regulatory authorities.

The raffle is usually a month long and is called Season. Everyday of the season, there is a daily giveaway called Round. Each round will start by 8:00am and end at 6:00pm after which a draw will be done.  You can participate in a Season by purchasing a ticket. Tickets are sold at a fixed price of ₦500 currently. When you buy a ticket, you automatically qualify for that day’s Round. You can view all your tickets by clicking on the tickets tab.

If a ticket is drawn in the round, player will be notified via SMS and then proceed to portal to generate a claim code for the reward. The claim code will be sent to player’s phone and will never be shown on the portal. Player must provide the code at any designated pickup location to claim the reward.  The monthly draw will be held at an event. Details will be communicated to all participants and will also be posted on the company’s website.

Among the dignitaries at the media launch are representatives of Lagos State Lotteries Board while ace comedian, Gbenga Adeyinka The 1st anchored the event.

VIDEO: I Am Not Cloned, I Am The Real Muhammadu Buhari’