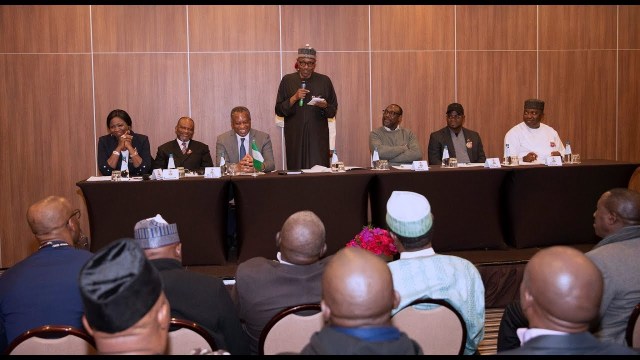 President Muhammadu Buhari reacted for the first time on Sunday to rumours that he is not the real Person elected by Nigerians but a look-alike double from Sudan, known as Jubril.

He declared: ‘‘It’s real me, I assure you. I will soon celebrate my 76th birthday and I will still go strong.’’

President Muhammadu Buhari was speaking in Krakow, Poland, when he met Nigerians living in the country.

For sometime, the fake news industry claimed that the Nigerian President is an impostor.

The issue was raised by one of the Nigerians. But an unruffled Buhari reaffirmed his authentic identity.

He described the authors of the confusion about him as ‘‘ignorant and irreligious.’’

‘‘A lot of people hoped that I died during my ill health. Some even reached out to the Vice President to consider them to be his deputy because they assumed I was dead. That embarrassed him a lot and of course, he visited me when I was in London convalescing… It’s real me; I assure you,’’ he declared. 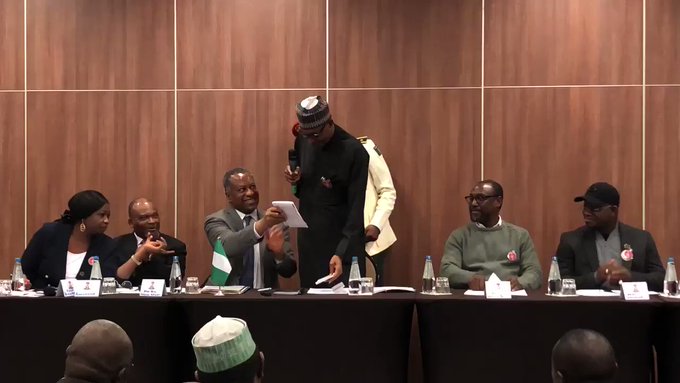 VIDEO: “ President @MBuhari’s response to the rumors [by ignorant and irreligious people] of him being cloned.

“…Somebody just thought I am cloned, …it is real me I sure you.”

481 people are talking about this

The Nigerian leader said he was looking forward to celebrating his 76th birthday on December 17 and jocularly added: ‘‘If I am getting harassed by anyone, it is my grandchildren, who are getting too many.’’

The President used the occasion to reiterate that his government will continue to maintain focus and deliver on the three focal points of his campaign in 2015: security, economy and the fight against corruption.

‘‘Those in the North East will tell you that in spite of the recent setbacks, there is a difference between the time we came and before.

‘‘We are not doing badly on security, economy and agriculture. We have virtually stopped the importation of food especially rice and we are saving a lot of money.

‘‘We now have food security and that has come with fiscal security because a lot of young educated people have not regretted going back to the farms and earning a respectable living.

‘‘I am afraid, this is not receiving good publicity… but a lot of people in the rural areas are enjoying the benefits of our interventions in agriculture,’’ he said.

President Buhari, who is in Poland to attend the UN Climate Change Conference, COP24 reaffirmed that no territory of Nigeria is under the control of Boko Haram terrorists, calling on Nigerians to remain vigilant and supportive of Federal Government’s efforts to ensure the security of lives and property in the country.

While acknowledging that it has not been easy financing the security sector in the country, the President said the Nigerian Armed Forces were equal to the task.

The President noted that it was regrettable that herdsmen and farmers clashes in the country have been politicised, assuring that the Nigerian government will continue to prioritise security because that is what many investors consider first before investing in the country.

On the fight against corruption, he said all recovered stolen assets will be sold and the proceeds returned to the treasury for the benefit of Nigerians.

On women representation in his government, the President told the meeting: ‘‘I have plans for all Nigerians. I am not a male chauvinist. If I’m a chauvinist will I give the Finance Ministry to women?’’

In his remarks, the Ambassador of Nigeria to Poland, Mr Eric Adagogo Bell-Gam praised Nigerians living in the country for being worthy ambassadors of the country.

Among those who met President Buhari were Mr Larry Ugwu, an Artist and Curator, who has lived in Poland for 40 years and has contributed immensely to promoting Nigerian cultural heritage in the Polish society; Anthony Egwuatu, a Gynaecologist, who has lived in the country for 30 years and Mr Olomofe Larry, a human rights activist, who has fought for justice for fellow Nigerians in the host country, among several others.

The event was put together and anchored by Hon. Abike Dabiri, Senior Special Assistant to the President, Diaspora.

TOLU OGUNLESI TO PASTOR OYEDEPO: Why Spreading Falsehood on Buhari?