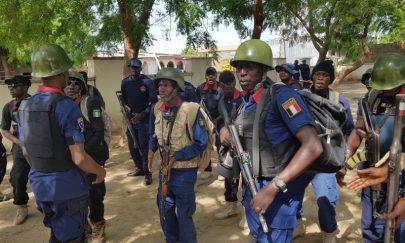 The Abia command of the Nigeria Security and Civil Defence Corps has arrested three suspects, who allegedly specialised in siphoning petroleum products with valves hooked to oil pipelines.

The state Commandant, Mr Nnamdi Nwannukwu, said this in Umuahia on Tuesday, while briefing newsmen on the activities of the command aimed at checkmating the nefarious activities of vandals in the state.

Nwannukwu said that the suspects, identified as Ikechi Ngozi, Chukwudinma Allen and Nwokoro Nwapem, “were caught in the act” on Sept. 3.

He said, “The suspects were caught in the act of affixing valves on the petroleum pipeline for the purpose of siphoning petroleum products illegally and loading it in GeePee tanks and drums fixed in standby buses.”

He accused the suspects of being behind the destruction of pipelines at Km 74.5 – 75.5 at Amekpu in Isialangwa North Local Government Area of Abia.

Nwannukwu said that the suspects confessed to have fixed the valves with the help of a technician, called Ogbuagu, who was still at large.

“These suspects have committed a lot of economic sabotage against our nation through their attacks on oil pipelines, which is a critical infrastructure to our nation.”

Also, the commandant said that the command arrested three other suspects for allegedly causing “malicious and collateral damage on a broken-down truck, conveying petroleum products and conversion of the products.

“The suspects were arrested for their alleged involvement in criminal conspiracy and fraudulent misrepresentation of facts by some supposedly fake staff of the state Ministry of Environment,” he said.

He said that the suspects illegally towed the truck and “carted away the products, disassembled the truck and sold it in parts” to scrap dealers at Alaoji Old Parts Market, near Aba.

“The suspects are also being investigated for receiving stolen property at the scene of the crime at Imo Gate on the Enugu-Port Harcourt Expressway,” he said.

He said that the command had spread its dragnet in search of other members of the syndicate, who allegedly had fake identity cards and emblems of the ministry in their possession when operatives of the command accosted them.

The commandant, therefore, charged the state government to scrutinise the activities of scrap buyers in the state.

According to him, “It is a syndicate that goes about dismembering accidents and broken down, faulty vehicles and property of innocent road users that needed to be fixed, take them to an unknown destination, pieces them and sell them off as scraps.”

He said that the command would arraign the six suspects at the end of its ongoing investigations.

The wife of one of the suspects, 33-year-old Amarachi Ugochukwu, was said to have been arrested at her shop housing some of the scraps.

In an interview with newsmen, Ugochukwu, who claimed that her husband was a dog meat seller, said that she had no knowledge of the alleged crime.

She, however, said that she did not know the whereabouts of her husband but admitted that they had been communicating via cellphone since she was arrested.

The driver of the tow van, Ikechukwu Achinihu, said that he was contracted by a man who drove in a Toyota Avalon.

Achinihu said that he was oblivious that the truck he was hired and paid to tow did not belong to the man.

He said that he was initially reluctant to do the job until the man and two others with him convinced him with identity cards that they were officials of the ministry.

He said that he also saw operatives of the corps and their vehicles, when he went to tow the truck, adding that the operatives gave them protection on their way to where he packed the truck.

He said that at a point on the expressway he lost sight of the man that hired him, until the third suspect, one Uchenna Iheonunekwu, suddenly showed up from his shop and directed him to where he packed the truck.

He said that he was surprised when men of the corps called him the following day, arrested him and asked him to take them to where he packed the truck.

The command’s spokesman, Mr Agu Ndukwe, said that the operatives were attracted to the truck on the expressway when they noticed that it was conveying suspected petroleum products before it broke down.

He said that neither the driver and owner of the truck nor the fake ministry officials, who allegedly hired the tow van, had yet to report to the command.

He said that efforts were being intensified by the command to track them down.