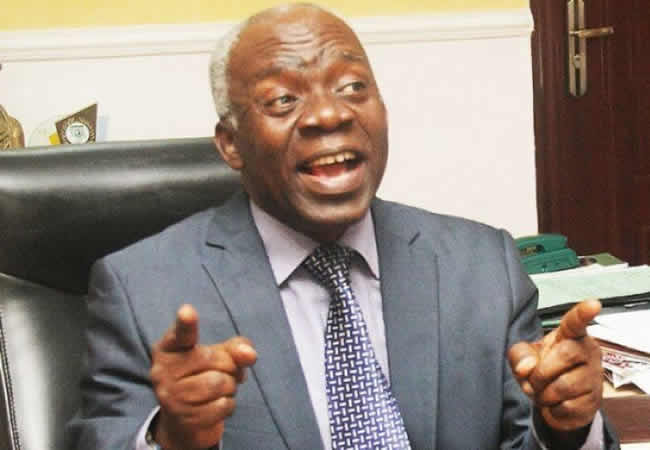 In a statement titled, ‘How FG Frustrated Ibori’s Trial in the UK’, on Sunday, the lawyer narrated how the Federal Government of Nigeria through its Attorney-General of the Federation, Michael Aondoakaa, challenged the investigation of Ibori in the United Kingdom in 2009.

Falana, who is the interim Chairman, Alliance on Surviving COVID-19 and Beyond, said it is funny that the same government could claim ownership of the over £4.2m (N2.2bn) being repatriated.

The senior advocate noted that Aondoakaa had said the UK’s decision to probe Ibori was an insult to Nigeria’s sovereignty.

He said, “It is on record that the Federal Government openly opposed the trial of Chief Ibori in the United Kingdom. In fact, in utter breach of the provisions of the Mutual Legal Assistance Treaty between Nigeria and the United Kingdom the then Attorney-General of the Federation, Chief Michael Aondoakaa (SAN) rejected the request to make relevant documents available for the trial in the UK on the ground of sovereignty.

“In particular, Chief Aondoakaa refused to entertain the request of the UK Metropolitan Police and made under bilateral mutual assistance to Nigeria on the grounds that the request was not made by the Home Office.”

He, therefore, argued that the Delta State Government could not be denied the billions recovered from its former Governor, James Ibori, just because the state government once said Ibori never stole.

Falana said, “No doubt, the former Delta State Government was irresponsible to have denied that Chief Ibori looted the treasury of the state at the material time. But such denial cannot be a justification for the confiscation of the Ibori loot of over £100m that is expected to be repatriated to Nigeria by the British Government.

“After all, before his assumption of office as President in May 2015, General Muhammadu Buhari had repeatedly maintained that the late General Sani Abacha did not steal a dime from the account of the Federal Government.

“But the Federal Government under the President’s watch has continued to recover the remaining Abacha loot and no one has suggested that such recovered loot be paid to the account of the United Nations or African Union on moral grounds.”

The activist said the court judgment being relied on by the Federal Government to cheat the Delta State Government of the Ibori loot was based on a different matter.

He said the case involved the £15m bribe offered to the then Chairman of the Economic and Financial Crimes Commission, Nuhu Ribadu, adding that the Judge, Gabriel Kolawole, only stated that the £15m be forfeited to the Federal Government and not all future recovered loot.

Falana added, “No doubt, the former Delta State Government had denied any loss of money during the proceedings of the Federal High Court for the confiscation of the $15m bribe given to Mr. Nuhu Ribadu by Chief James Ibori.

“Hence, the presiding judge, Kolawole J. (now JCA) directed that the fund be paid into the Federation Account for distribution in line with the provisions of the Revenue Allocation Act. But the Delta State Government never said that the over £100m confiscated from Chief Ibori in the London trial did not belong to the people of Delta State.”

ASUU to FG: we may resume strike if…