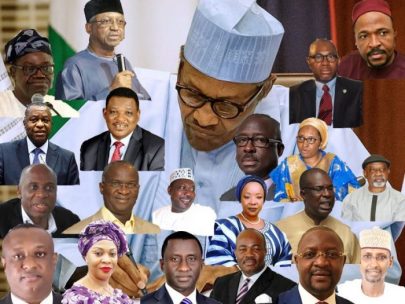 Nigeria’s President, Muhammadu Buhari recently sent the list of 43 ministerial nominees to the Senate for approval. Some of the nominees have already been screened. But how much do you know of some of the new entrants into the cabinet?

Here are their pedigrees:

Emeka Nwajiuba is from Ehime-Mbano LGA of Imo state, Southeast Nigeria. He was born shortly after Civil War broke out on August 20, 1967. He was called to the Nigerian bar in 1989, pursued his LLM at University of Lagos and PhD at the University of Jos.

He had served as House of Representatives Committee Chairman on Land, Housing and Works from 1999 to 2003 before contesting Imo governorship election on the platform of APP in 2003, 2007 and as CPC candidate in 2011.

he contested for Imo state governorship election in 2003 challenging the then incumbent governor, Chief Achike Udenwa of the peoples democratic party. He is the current Chairman of Tertiary Education Trust Fund (TETFUND).

The retired banker has long been tipped for ministerial appointment. He comes to the cabinet with years of experience in banking.

Magashi is a lawyer and a graduate of Ahmadu Bello University (ABU) Zaria. He holds a national award of CFR.

During the intrigues leading to General Sani Abacha’s assumption of power in November 1993, Brig. General Bashir S Magashi was given command of the Brigade of Guards in September. He was a member of the Abacha Military Caucus that reviewed the military and the political situation resulting from annulment of the 12 June 1993, issuing a report title The Way Forward with recommendations for a partial military regime.

Shortly after democracy was restored in May 1999, the government announced the compulsory retirement of all armed forces officers who had served for six or more months in military governments, including Major-General Bashir Magashi.

In 2002, he was legal advisor to the All Nigeria People’s Party ANPP. In April 2007, he was Kano State governorship candidate of the Democratic People’s Party (DPP).

Ramatu Tijjani was born on June 12, 1970, in the quiet environs of Wuse in Abuja. Born into the royal family of late Alhaji Sidi Ali Mamman Bawa Allah of Lokoja, Kogi State. At Dawaki Primary School, Suleja, in 1976, she began the search for the value of life. Six years after in 1982, after obtaining her first school leaving certificate, Ramatu arrived the Federal Government College in Minna, Niger State and graduated in 1988.

Two years later in 1990,  she went to Ahmadu Bello University, Zaria where she bagged a Bachelor’s Degree in Urban and Regional Planning.

Armed with the enduring armour of knowledge and burning with a passion to positively engage humanity, she began a robust work life by serving her compulsory National Youth Service Scheme at the Federal Ministry of Works and Housing. After a successful service to her father land, Ramatu joined AZAH intermediaries Nigeria Limited, a civil engineering construction firm, as one of its Managing Directors.

She went to Nasarawa State University, Keffi, where she got a Masters Degree in Public Administration. She’s currently acquiring a PhD in Security and Strategic studies at the institute of governance and development Studies from the same Ivory tower.

Saraki attended the University of Sussex in the United Kingdom and earned a bachelor’s degree in Economics. She did her national service at the Nigeria Bank for Commerce and Industry, Lagos. She worked for the Societe Generale Bank (Nigeria) as Head of Money Markets and later as Head of Domiciliary Accounts From 1994 to 1999. She was Executive Director of Ashmount Insurance Brokers, Lagos. She is widely known for her intelligence, philanthropy, and love for education.

It is on record that besides her father, Dr. Olusola Saraki, no politician from the north-central zone has given out as many scholarships as Gbemi Saraki. Gbemi Saraki is Kwara’s biggest grassroots mobilizer.

She re-contested in 2007 and won again, serving as a Senator of the Federal Republic of Nigeria for eight years, 2003-2011. She is the female legislator with the highest number of sponsored bills in Nigeria.

Mamora was a National Delegate for the National Republican Convention (NRC) in 1990, and Secretary, Lagos East of the United Nigeria Congress Party (UNCP) in 1998. He was elected to the Lagos State House of Assembly in 1999 and was appointed Speaker. He was Chairman of the Conference of Speakers (2000 – 2001). Mamora was elected to the Senate in April 2003 and reelected in 2007. He was also a member of the Economic Community of West African States (ECOWAS) Parliament (2003 – 2006). In 2003 he was appointed chairman of the Senate Committee on Ethics, Privileges and Public Petitions.

After resuming his seat in the Senate in 2007, he was appointed to committees on Upstream Petroleum Resources, Selection Committee, Health and Federal Character & Inter-Government Affairs. In a mid-term evaluation of Senators in May 2009, ThisDay noted that he had sponsored bills on Tenure of Office, Surgeon-General of Nigeria and repeal and amendment of the Tobacco Control Act. He sponsored or co-sponsored motions including one to amend Senate rule 111 to bring it into conformity with the Constitution of the Federal Republic of Nigeria. Mamora was described as a master of parliamentary procedures.

The current Chairman of the Universal Basic Education Commission (UBEC) is a former member of the Kaduna House of Assembly and Chairman of the Buhari Support Organisation.

No information and details about him

He is the immediate past Ogun Commissioner for Works and Infrastructure.

He was a former Senator and a former Secretary to Ondo State Government.

Ogbeni Rauf Aregbesola was born on 25 May 1957. He is a Nigerian politician. He served previously as the governor of Osun State between 2010 and 2018.

Aregbesola was an activist. He was Lagos State Commissioner for Works and Infrastructure when he ran for election in April 2007 on the Action Congress platform.

Aregbesola sought reelection for a second term on the platform of the All Progressives Congress on the 9th of August 2014, contesting against Sen. Iyiola Omisore of the People’s Democratic Party and Akinbade of the Labour Party. Having satisfied the requirement of the Law and scored the highest number of votes. He was declared the winner of the election.

The former editor is Executive Commissioner (Stakeholder Management) of the Nigerian Communications Commission. He is to represent Oyo state.