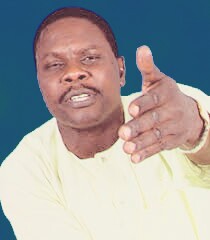 Have we moved forward, stagnant or retrogressed? First, we must agree that democracy is a journey and to that extent, we can’t say that we are stagnant. We started taking steps in the journey in 1999 and we are still in transit. I concur that we are not there yet but the worst of the civilian rule cannot be placed beside military and dictatorial government.

What is your take on the change of Democracy Day from May 29 to June 12?

First of all, I think we should know that June 12 is not all about the late Chief MKO Abiola, some people were active players and we believe they should be recognized as well. Some of us are not too comfortable with the award that was given to Moshood Abiola and Babagana Kingibe, the GCFR and the GCON. The issue could have gone beyond the award. Yes, the President took some good steps by recognizing and giving him an award. The late Awolowo was given GCFR but he was never a president of Nigeria. Former President Shagari also gave the late Aminu Kano GCON. You can see that the two titles are only conferred on privileged people. In the United States, many ordinary people get the highest awards because they did things in an extraordinary manner. The same applies to the United Kingdom’s MBE award. Many people that were involved on June 12 and many Nigerians are waiting for the day the June 12 election result will be announced and Abiola will be declared the president-elect. There are so many families that suffered one lost or the other during the struggle. For example, I lost my sister during the 1994 riot on June 12. People like Alfred Rewane was killed, many were maimed; until June 12 result is announced and Abiola is declared president-elect, then these people can now take a sigh of relief in their graves. So, what we have done is just cosmetics, the issue of June 12 goes beyond Abiola.

What is take on the call for Oshiomhole’s resignation?

If I have my way and if APC wants to see that party outlive Buhari, they should remove their national chairman, Comrade Adams Oshiomhole immediately. The coming on board of Oshiomhole was a one-man show; Tinubu brought him.That erstwhile chairman, Odigie-Oyegun, was an erudite administrator and his only crime was that he didn’t agree to be a rubber stamp to some interests. Look at the mess Oshiomhole caused APC. In an ideal society, when you cannot deliver as a party leader after the election, you quit. If Oshiomhole told the world that the state chapters cannot conduct primary elections except for the constituted election committee from the party, ask him, who announced the result of the election in Lagos? So, when you are running a party, you don’t run it as a gang group. So, Oshiomhole has caused more harms than good to that party. The truth is that Buhari is not concerned about who emerge at the National Assembly, he is not ready to interfere, that’s him.

What are the likely templates you can set for President Buhari as he takes another four years?

I think he has set the template for himself when he said Nigeria needs genuine federalism. I want to urge all stakeholders to see how we can work with him in achieving this. It may not be true federalism now, but we are talking about devolution of power to the states. If I have my way, he should also reduce the cost of governance, our overhead is too big. Some of the ministries and agencies should be closed down, others should be merged. If not for the constitution we have, we don’t need 36 ministers. As of today, we are using 60 per cent of our revenue servicing debts. I doubt that the debt forgiveness that we got during Obasanjo’s time will ever come again. Today, we are borrowing to pay for consumption, most of the monies we borrow go for salaries and emoluments. That is dangerous. The president should also look at this procurement process in government, it is another draining agency in this government. It has been corrupted. Also, the government should find a way around these killings, banditry, and kidnappings. It’s alien to us, we must fix the security situation of the country. Do you agree with calls for restructuring and the return to regional governments? With due respect to those who are talking now, what was their position on restructuring of the country some few years ago? If you look at former President Olusegun Obasanjo, a man I admire so much and I call my father, based on where he was coming from and what the military did to him, he could have been the forerunner of this fiscal federalism. When former President Goodluck Jonathan came, he didn’t do much as well on it. They saw these inequalities and injustices, they did nothing. Now, they are all mounting pressure on Buhari who didn’t promise any restructuring. Many of those who are mounting restructuring on us now were with Buhari in CPC and ANPP. Tinubu talked about restructuring many years ago, same for the Vice President, Yemi Osinbajo, but what are they saying now? The truth is that people are not just sincere with this restructuring issue. For me, my perception of restructuring is that we should go back to genuine fiscal federalism whereby a state like Ondo State would be allowed to do the mining of the bitumen in its backyard and pay royalties to the Federal Government.

Are you saying there is too much power concentration at the centre?

Do you know that today in Nigeria, nearly all the inmates in the federal prisons are state offenders and Federal Government is spending billions of Naira to take care of these inmates who are arrested for minor offences? For example, if someone is arrested by KAI outfit for a minor offense, there will be a mobile trial that will sentence him and they will go and dump him at Ikoyi Prisons for the Federal Government to take care. This is part of the anomalies in the current structure and it’s disheartening that many people are still agitating for the creation of states. How many states in Nigeria today are solvent enough to pay salaries and emoluments as and when due? Except for Lagos, Ogun and some oil-producing states, other states are borrowing to pay salaries. What we are saying about restructuring is that the Federal Government is holding on to many things and they should devolve power on. I’m not saying we should create more states because if I have my way I will collapse the existing ones. There is too much power at the centre even with our policing system. In the colonial days and the First Republic, there were regional police. But you can’t try state or regional police at this time because many of these governors you are seeing now are despotic and overbearing. If Buhari does half of what they are doing to the opposition in their states at the federal level Nigeria will collapse. There are some governors in this country today that you can’t question talk more of criticizing using social media, they will arrest you. If you allow such leaders’ access to state police, you are looking for anarchy. But in the real sense, almost all the states today have fashioned out their own grassroots policing system. What is the job of LASTMA and KAI in Lagos? Most of the states have one form of enforcement outfit or the other. They should, however, find ways of synergizing everything.

The Bayelsa governorship election is slated for November. Considering what happened in 2015, how do you think the poll should be handled?

At this just concluded election, Rights Monitoring Group (RMG) monitored the election and we deployed more than 10,000 observers across the country. Apart from the presidential election that is still at the tribunal, technically, PDP won the election. The reason is this; in 2015, APC got about 19 governors elected and PDP got nine governors. But today, the gap is closed. So, it’s a very good development for our democracy and a good omen for the PDP. Assuming the Bukola Saraki’s and Atiku Abubakar’s of this world didn’t leave the PDP in 2015, PDP would not have been where it is today. As a stakeholder in the country’s electoral system, I want to plead with Governor Dickson and the PDP, that the affairs of the governorship election from the primaries should be handled with fairness and caution. No doubt about it, Dickson has performed in the last eight years. Go to Bayelsa and see the infrastructures he has put in place. Former President Goodluck Jonathan is like a father to me, he didn’t know me but he asked the DSS to screen me for an appointment which I later declined, I want to plead with him not to dabble into the affairs of who succeeds Governor Dickson in Bayelsa to avoid crisis. This is because politicians are what they are, they might start pushing him to fight for positions. He is an elder statesman and a worthy son of Bayelsa. Those of them who ran away in the last election, who confronted Dickson and now came back to PDP should just go and queue to avoid a crisis in that fragile state, they should not be imposed. If those of them who jumped here and there have maintained discipline, PDP would have been stronger than this. Today, they want to be governor but loyalty must first be repaid. At the federal level, the former Governor of Jigawa State, Sule Lamido, would have been a good candidate for the PDP, but they didn’t repay loyalty, they gave their ticket to Atiku who left and demarketed the party before returning. Where I come from, you don’t put faeces in the water that you want to drink. So, in Bayelsa, they should allow internal democracy to prevail in who becomes the party’s candidate and a democratic hero like former president Goodluck Jonathan should not dabble into the PDP affair of selection. Nobody should dabble into the candidacy of the party, not even the PDP in Abuja or even governors of the party. Bayelsa is the centre of the Ijaw states and whatever happened there will have a ripple effect on all other oil-producing states in the region.