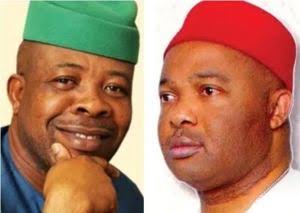 The governor-elect of Imo State, Senator Hope Uzodinma has performed his first assignment following supreme Court judgement, he has issued an order freezing all bank accounts belonging to the state government with effect from January 14, 2020.

According to an ‘Order of Post No Debit’ issued by Director-General, Hope Uzodinma’s Campaign Organisation, Chief Cosmas Iwu, to all financial institutions and the Accountant-General of Imo State, no bank is to honour any transaction from the government of Chief Emeka Ihedioha or his officials.

The document, which was issued on January 14, 2020, titled ‘Order of Post No Debit on all accounts of Imo State Government Effective Immediately 14th January 2020’, reads:

“Following the Supreme Court judgment of 14th January 2020, I am directed by His Excellency, Senator Hope Uzodinma to take this to your authority/instruction to place a Post No Debit (PND) order on all accounts of the Imo State Government maintained in your various institutions.

“You are by this letter, directed to comply and await further instructions from the office of His Excellency, the Executive Governor of Imo State.”