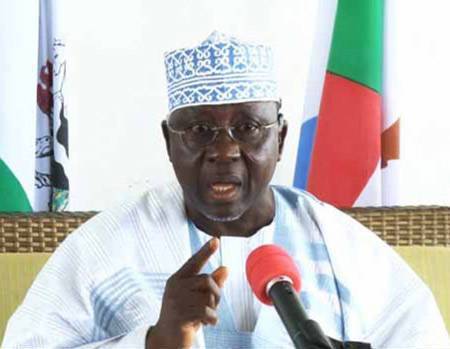 His Excellency Governor Umaru Tanko Al-makura of Nasarawa State has described the relationship which exists between voters of Lafia, capital city of Nasarawa State and President Muhammadu Buhari as a “sacred pact that is divinely inspired by providence to rescue Nigeria!” Governor Tanko Al-makura made this proclamation while receiving a cross section of community elders, traditional title holders and representatives of every single ward in Lafia who came to pay him sallah homage at Government House Lafia. The broad spectrum of Lafia elite, youths and women were led by Chairman of Lafia Local Government Aminu Maifata who came in company of Honorable members of the Nasarawa State House of Assembly representing Lafia , APC National Deputy Chairman of North East, Honorable Suleiman Wambai and APC State Secretary Aliyu Bello, among other political gladiators. To set the tone of solidarity visit, Wazirin Lafia who represented the Emirate Council and Emir of Lafia HRH Alhaji Dr. Isa Mustapha Agwai described the 7 year of stewardship of Governor Umaru Tanko Al-makura as the proverbial “golden era when modernity was unleashed in Nasarawa State!” The royal father asserted that the historic effort Governor Tanko Al-makura put to transform and advance Nasarawa State to the frontiers of economic prosperity is incomparable and incontestible, which is why the entire citizenry are waiting with patient expectation for His Excellency to give the people a nod as to which direction he desires the masses to place their electoral fortunes so as to secure a consolidation of his legacies in Nasarawa State. The royal father however noted that although Governor Umaru Tanko Al-makura is a son of Lafia, the clarion call for him to contest as Senator representing Nasarawa South Senatorial which has now become an unstoppable tidal wave, did not even begin in Lafia: but that it was the people of Doma, Awe, Obi and Keana who fervently requested that Umaru Tanko Al-makura should accede to their prayers and champion the cause of the people in the National Assembly! On his part APC Secretary Aliyu Bello proclaimed that “It is time for Lafia to blow her political trumpet” because Umaru Tanko Al-makura Lafia has now proven to friends and naysayers that: “In Umaru Tanko Al-makura, Lafia has illustrated the unrivaled success of a worthy son and political gladiator whose sheer developmental successes has left even the most staunch opposition dumbfounded!” Bello reminded the gathering that Lafia is the political furnace and engine room where the fortunes of anyone who wishes to become governor is smelted and in this regard, Lafia is unwavering in its implicit loyalty to wishes and patriotic inclinations of Governor Umaru Tanko Al-makura. The APC National Deputy Chairman of the North Central Suleiman Wambai, described Governor Tanko Al-makura as a man of history whose leadership traits combine the attributes of the English explorer Mungo Park who discovered uncharted lands and Alexander the Great, who was reputed to be the greatest war General to in the entire world. In his response Governor Umaru Tanko Al-makura expressed his gratitude for the show of solidarity and praised Lafia town and her people for their stoic conviction and unwavering support to President Muhammadu Buhari in his singular mission to rekindle integrity in the Nigerian political space. Governor Umaru Tanko Al-makura reaffirmed his pride in Lafia for playing politics which inspires hope and values rather than trigger dividends and politics of bitterness. The Governor reassured the multitude that the political future and fortunes of Nasarawa state will be decided collectively for the greater good of the State! In conclusion Governor Umaru Tanko Al-makura reminded the voters of Lafia that they have a sacred pact with President Muhammadu Buhari to ensure that he gets a 2nd term in office to continue the process of re-engineering which the President has began, which is why Nasarawa State as the political laboratory of President Buhari and indeed Lafia which is “The Citadel of the Buhari revolution!” must remain in the forefront of the effort to vote Muhammadu Buhari again in 2019 as President of Nigeria! Signed YAKUBU LAMAI, Director General :Strategic Communication and Press Affairs to HE GOVERNOR Umaru Tanko Al-makura