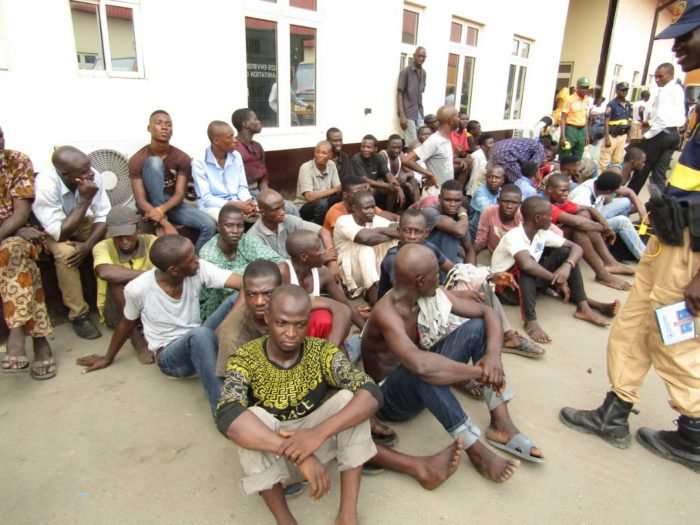 The Lagos State Government has arrested over about 200 cart pushers across all the 57 Local Governments and Local Council Development Areas of the State for constituting environmental nuisances.

The arrest was made possible through a joint environmental sanitation raid by the Lagos State Neighborhood Safety Corps and Lagos State Environmental Sanitation Corps whose enforcement officers spread across the state simultaneously.

They arrested cart pushers who pick refuse from citizens and dump wastes at roadsides, major roads and other public places.

Speaking at the parade of arrested environmental defaulters at Safety Arena, Bolade, Oshodi, the Board Chairman, Lagos State Neighborhood Safety Corps, DIG Isreal Ajao said a cleaner and healthier Lagos remained top priority for Lagos State Government in its transition from a mega city to a smart city.

If  government is transcending from mega city to smart city, all the components must be there. The key components of a Smart City is a clean and healthy environment,” he stated.

He said indiscriminate dumping of refuse on road medians, drainages; highways and everywhere would not be tolerated as government had committed a lot of resources, both human and material to ensure Lagos remained a healthy habitation for all through the Cleaner Lagos Initiative.

The  Chairman called on residents of the state to stop patronizing cart pushers, adding that they should continue to support the authorized waste manager of the State Government, which is VisionScape.

“Residents of the state should buy-in to the Cleaner Lagos Initiative and sustainable environment. Of course you know without a healthy body you cannot have a healthy life.

“Offenders will be prosecuted under the state sanitation law. This will serve as a deterrent to others. Residents should dispose their refuse in a manner that is authorized.”

The Corp Marshall, Lagos State Environmental Sanitation Corps, ACP Daniel Isiofa (RTD) noted that dumping of refuse on road median would affect drainages, which could cause more disaster to environment as the raining seasons approached.

He said environmental offenders would be charged under the Lagos Environmental Sanitation Law with a minimum penalty of community service, N20,000 and maximum N50,000 fines.

“There is no other alternative to health. Governor Ambode’s aims of ensuring entirety of state is clean must be achieved. Lagosians should cooperate with government to ensure they are healthy.  We will continue to demonstrate our goal of ensuring Lagos is cleaner and healthier for citizens,” he said.