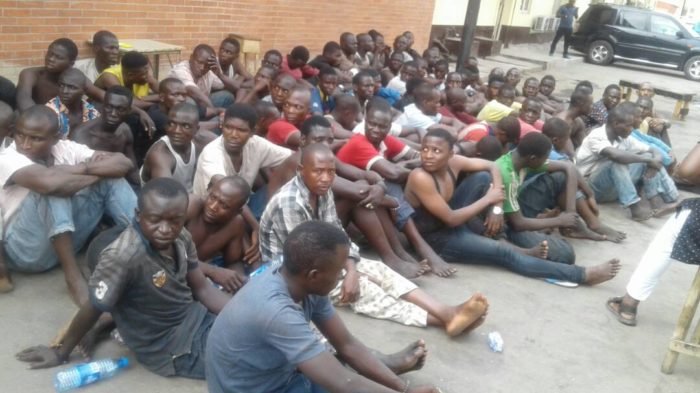 The enforcement operations was jointly carried out based on series of complaints from innocent members of the public on criminal activities allegedly perpetuated by motorcycle riders/operators around 2nd Rainbow, FESTAC and Mile 2 areas.

Some of the impounded Okada

Investigation conducted revealed that illegal activities of motorcycle riders were on the increased as they terrorised innocent members of the public both day and night by dispossessing them of their valuables such as phone, jewelries and bags.

The investigation further revealed that motorcycle riders around these areas were responsible for series of attacked on vehicles owners/drivers whenever there is traffic at night around Mile 2 bridge towards FESTAC.

The Chairman of the Lagos State Task Force, SP Olayinka Egbeyemi advised motorcycle riders to properly screened out criminals among their members and educate others to stop plying any of the restricted 475 routes which included highways and bridges across the State.

He enjoined private power bike (200cc above) owners/operators, particularly corporate bodies to warn their dispatched riders to stop engaging in illegal commercial activities as any one caught violating any sections of the Lagos State Road Traffic Laws of 2012 would be prosecuted

Egbeyemi, however, confirmed that the Lagos State Commissioner of Police, Edgal Imohimi has directed that all those arrested during the operations be immediately charge to court for prosecution.