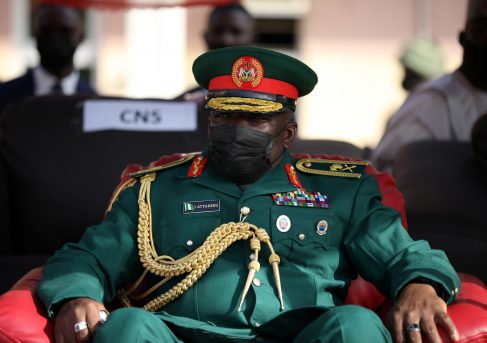 The burial proceedings of the Chief of Army Staff (COAS), Lieutenant General Ibrahim Attahiru and six other senior officers who lost their lives in an air mishap in Kaduna on Friday will be held on Saturday in Abuja.

Army’s Director of Public Relations Brig. Gen Mohammed Yerima said the burial will commence at the National Mosque and National Christian Centre, Abuja by 10am.

The interment for the late COAS and 6 other senior officers will take place at the National Military Cemetery, Abuja by 1pm.

The army officers were killed on May 21, 2021 when their plane crashed in near the Kaduna International Airport, an air force spokesman said.

Attahiru was appointed by President Muhammadu Buhari in January in a shakeup of the top military command to better fight surging violence and a more than decade-long jihadist insurgency.

President Buhari, in a statement by his spokesman Femi Adesina, condoled with families of the deceased, the military, describing the dead military officers as “heroes who paid the ultimate price for peace and security in the land.”

While praying that God receives the souls of the patriots, Buhari said the crash “is one mortal blow to our underbelly, at a time our armed forces are poised to end the security challenges facing the country.”

The Chief of Defence Staff (CDS) General Lucky Irabor has directed that an Accident Investigation Board be constituted to unravel the immediate and remote cause of the crash.

Irabor said the Armed Forces of Nigeria remains resolute in combatting the security challenges bedevilling the nation. “The sacrifices of our dearly departed heroes will not be in vain” the Chief of Defence Staff said.

The CDS urges all military personnel and their families to take heart and be condoled on this tragic loss. The CDS also reassures all Nigerians of the commitment and loyalty of the Armed Forces of Nigeria to the Constitution and Government of the Federal Republic of Nigeria, as it continues to carry out its responsibilities.