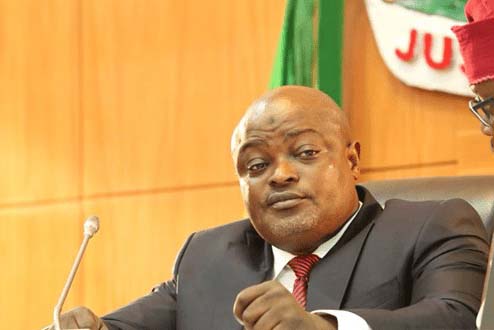 Obasa understood what he meant. This was at a time there were hush discussions about threats from bandits, alleged herdsmen and kidnappers. Ikorodu was gradually emerging a notorious zone for criminals trying to test their whits. Was Obasa right? Was he wrong? The two questions rested in the hearts of those he was speaking with.

Few weeks later, Obasa again, with few lawmakers, some aides, and friends, during a non-formal discussion, herped on the need for a zonal security outfit. According to him, since the call for state and community policing had constantly hit the brickwall, it would make sense to have an organisation that is considered closest to the grassroots. There was the argument that the police, as much as they try, may not find it easy enough routing crime from every nook and crany of a state.

This is predicated on the fact that there is a central authority in Abuja, many kilometres away from states and this tends to challenge timely interventions in the case of emergencies. For example, a police unit would sometimes have to reach out to the commissioner, who, in turn, follows the chain of command in the case of any emergency till it gets to the Inspector-General. The response then follows same chain till it gets to the unit. The effect of this can only be left to imagination.

Again his idea remained fallow, maybe to others. Later developments showed that the speaker never discarded the thought. The State Neighbourhood Safety Agency, which also controls the activities of the Vigilante Corps in the state, is the result of that thought.

Single-handedly sponsored by the speaker, the bill, which later became a law establishing the agency, sought for a more refined way of tackling crime, through effective surveillance and proactive actions. Has the Neighbourhood Watch helped the state, which wants to pride itself as a mega city in the near future? The answer is a ‘yes’.

One of its first test happened shortly after it was created. Badoo, the dreaded cult-like body that had a particularly strange way of killing their victims, evolved. It was mainly in Ikorodu. The criminals had suddenly mastered the act of nocturnal practices that left sorrows, anguish, tears and blood behind their trail. They hit at night while their unsuspecting victims slept. In some cases, they killed men, at other times, the women could not escape their attack. On a particular occasion, they reportedly killed a man, his wife and child. It was a pathetic situation that needed to be urgently curbed.

The police, under the supervision of Edgal Imohimi as commissioner, was having sleepless nights. Communities affected were in disarray, those not yet hit could not live in peace. Local vigilance groups were set up. Then, Neighbourhood Watch drafted its men to support the police. It only took a little more time, the cult group was run over, its leaders were arrested and peace returned to Ikorodu.

Since the Establishment of the Neighbourhood Watch, the organisation has assisted in quelling tensions, supported the state’s traffic management agency in resolving traffic issues, liaised with law enforcement agencies and carried out emergency activities. Above all, it has pulled out some residents from unemployment. It has also continued to enjoy accolades.

One cannot say, for sure, whether Obasa later sold the idea to any of the governors in the South West. However, one can confidently say the establishment of the Neighbourhood Watch was the ‘forunner’ for the creation of Amotekun almost four years after.
Amotekun is currently enjoying the support of a majority of the South West people and residents. Taking the shape of the Neighbourhood Watch, it will help to unite the region beyond political considerations. It would not only boost the zone’s economy, since businesses thrive in a peaceful environment, but ensure that the people of the area live happily and sleep with their eyes closed.