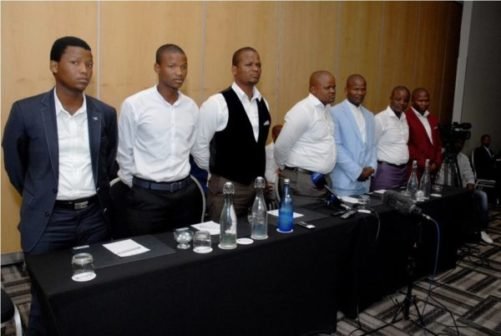 The church, called Mancoba Seven Angels Ministry, was sacked Saturday after some members of the church attacked a police station in the tiny Eastern Cape Town of Engcobo, killing five policemen.

Leaders of the church, who see themselves as angels, were alleged to be the masterminds of the attack at the police station.

The rescued girls were kept in about 10 corrugated iron shacks. Inside, mattresses lined the floor and clothes hung from wires or were dumped on the beds.

A high-ranking police officer told City Press that the cult, in the centre of Nyanga village, was established by a Mr Mancoba, who died in 2015.

Mancoba’s seven sons refused to follow their father’s successor. The “seven angels” and their mother subsequently became the leaders of the breakaway cult.

They soon ran out of money, which the officer said could explain why they attacked the police station and bombed two ATMs in town.

“They need money and are desperate. People of that church are brainwashed. They only live in their own world.”

The officer said at least three of the seven men killed in Friday night’s shooting were among the “angel” brothers, who had masterminded the massacre. One of them is on the run.

“The guys, known as angels, drive very expensive cars, but do not work. They are well known here in Engcobo,” the officer said.

“There are people here in this town who go to that church. People would give up all their pensions and donate them to the church,” said the officer.

City Press of South Africa reported that three of the seven Mancoba brothers suspected of involvement in the murders of the officers were killed during a shoot-out with police on Friday.

Sithole said the rescued girls were “indoctrinated and brainwashed” girls. They have been taken to social workers for counselling.

As City Press reported, the cult – run by the seven Mancoba brothers and their mother – was flagged by the government since 2016.

A report by chapter 9 institution the CRL Rights Commission, which was presented to Parliament’s portfolio committee on cooperative governance and traditional affairs in October last year, warned it was a disaster waiting to happen.

Commission chairperson Thoko Mkhwanazi-Xaluva told City Press she interviewed the cult leaders in 2016 during her investigation into church practices and made the parliamentary committee aware of her “serious concerns”.

“Everyone [at the cult] was sitting waiting for Jesus to come. We told Parliament that this was a high risk and these people need urgent attention.

“We warned that there will be something else [that will happen] once their money runs out. Look what has happened,” Mkhwanazi-Xaluva said.

“This has been a ticking time bomb. We said either these people are going to commit suicide or something else will happen.

“We questioned the sanity of church leaders, who saw themselves as angels sent by God.”

The Eastern Cape social development department knew about the cult. Spokesperson Mzukisi Solani said officials went there in 2016 and rescued 18 children. They were taken to places of safety after the department obtained a court order. After the raid, they alerted the CRL commission to the cult.

On Friday night, police tracked down those who allegedly attacked the police station. They were found 3km outside Engcobo and about 500m from where two of the five slain policemen were executed before their van plunged into a gorge. Seven cult members were killed in the ensuing shoot-out and 10 were arrested.

Double honours for Primate Elijah Ayodele as he celebrates birthday

No prosperity without sacrifice, says Olajire Precious Majolagbe as she speaks on life at 50