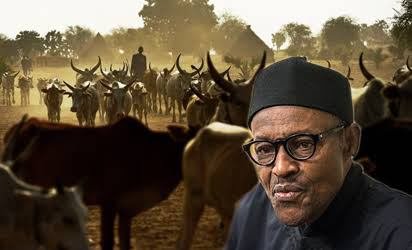 The pan-Yoruba socio-political group, Afenifere, has urged Buhari to urgently resign his membership of the Myetti Allah group or forfeit his position as president of the country.

Afenifere, rising from a meeting held at the house of its leader, Pa Reuben Fasoranti, in Akure, Ondo State yesterday, alleged that the president has conflicting roles as the patron of Myetti Allah and the president of the country.

The Yoruba leaders said if Buhari failed to choose one out of the two responsibilities, in the interest of the country, the National Assembly should begin the process of impeaching him, and also for spending money without budgetary approval.

In a communique read to journalists by Afenifere’s spokesman, Mr. Yinka Odumakin, the group said the position occupied by the president as a member of Myetti Allah made it difficult for him to take decisive action against Fulani herdsmen that have turned Nigeria into a killing field.

“There is hardly any day now you open our newspapers without reading about scores of citizens who have been killed in cold blood by this terror group with our security agencies unwilling to act in the defence of the citizens.

“The fears that were raised by Lt. Gen. Danjuma (rtd) that there was collusion between security forces and the killer herdsmen, have become much more real by the declaration by the Emir of Nka in Zamfara just yesterday after 26 people were killed in his community.”

Odumakin quoted the emir to have said: “We are so disturbed over this issue. We noticed negligence of the security agencies because they came after the damage has been done and very too late.”

It was gathered that the militia herdsmen, who ransacked the entire village around 5:30 a.m., also set ablaze over 80 houses and destroyed foodstuff.

One of the sources said: “The killer herdsmen, unknown to us, ambushed our settlement. They shot sporadically at dawn, and slaughtered our people, including two Catholic parishioners who were in the church at St. Ignatius Quasi Parish in Ukpor-Mbalom for their 5:30 a.m. devotion.

The Director of Communications, Catholic Diocese of Makurdi, Rev. Father Moses Iorapuu, who confirmed the incident, named the priests killed in the attack as Rev. Fathers Joseph Gor and Felix Tyolaha.

Iorapuu who expressed disgust that the police seem to know nothing of the attacks which have been going on in other villages within Benue State since the anti-open grazing law came into effect last year, wondered why the international community has remained silent over the massacre of the citizens.

“It is very clear that it has been the goal of the jihadists to conquer Benue and Tiv people who resisted their advance into the middle belt and the Eastern part of Nigeria since 1804, the people who rejected Islam and fought for the unification of Nigeria in the Civil War of 1967 – 1970.

“There were over 170,000 internally displaced persons before the Naka invasion, and surely, with the current situation in Mbalom, Benue will be flooded with thousands more.

“The Catholic Diocese of Makurdi is one of the largest in Nigeria and has been active in providing relief materials, including education and skills acquisition lessons. To go for the priests means total destruction of everything we stand for and believe in as a people,” Iorapuu said.

According to source bodies of all the victims have been deposited at the mortuary of Bishop Moray Hospital, Makurdi.

Consequent upon the killings, tension is rising across Makurdi city resulting in security beef-up and closure of businesses, including major markets like Wurukum, Modern Market, Wadata and North Bank markets by the owners for fear of the unknown.

The Acting Governor, Benson Abounu, said it was another black day for the state.

“Benue is still under siege. It is clear that this is a calculated attack on the church and the burial that was ongoing in the community.

I understand that two reverend fathers were killed right in the church. We are under siege and I do believe that this has gone beyond farmers, herdsmen clash.

The Federal Government and the security agencies should look at this as insurgency and must be treated as such,” he said.

The Commissioner of Police, Fatai Awoseni, who also confirmed the incident, said he got the information as early as 5:00 a.m. and quickly mobilised security personnel to the scenes of the attacks.

In a reaction, President Muhammadu Buhari described as vile and satanic the killing of the worshippers and the priests.

Buhari, who declared that the country would not bow to the machinations of evildoers, yesterday vowed that the assailants would be hunted down and made to pay for the sacrilege committed.

“This latest assault on innocent persons is particularly despicable. Violating a place of worship, killing priests and worshippers is not only vile, evil and satanic, it is clearly calculated to stoke up religious conflict and plunge our communities into endless bloodletting,” the president said in a statement by his Special Adviser on Media and Publicity, Femi Adesina yesterday.