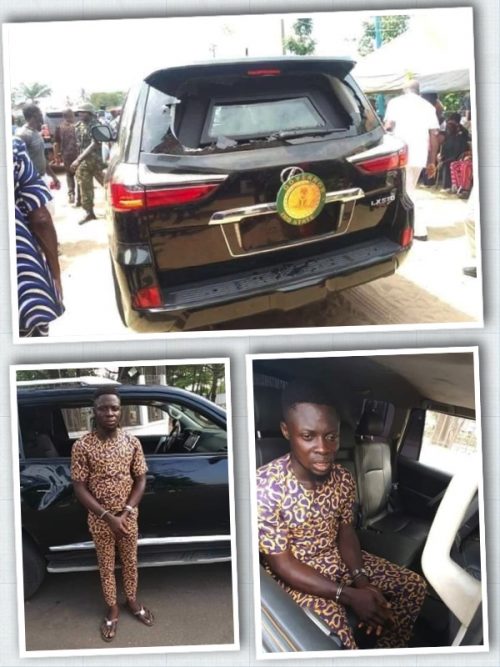 A leader of a youth group in Egbema, Imo state has been arrested for stoning the official car of Governor Hope Uzodinma.

The man, identified as Mr. Uzochukwu Chukuwukere, is the Vice Chairman of Egbema Youth wing. The stone he threw damaged the back windscreen of the official vehicle.

According to a statement by Oguwike Nwachuku, Chief Press Secretary/Media Adviser the culprit has made useful statement to the security operatives.

Nwachuku denied reports that there was a concerted attack on the governor.

“Governor Hope Uzodinma of Imo State was not attacked at Ohaji/Egbema on Sunday contrary to a devilish propaganda being peddled by the opposition”, Nwachuku said on Sunday night.

“The Governor was at Mmahu area of Ohaji/Egbema to sympathise with the community that lost three of their kinsmen on Friday following an accident that involved a truck belonging to an oil firm operating in the area.

“The killing enraged the youths in Mmahu, causing their leaders to reach out to the governor to visit the community to call the oil firm to order.

“Straight from church, Governor Uzodinma, in the company of the Brigade Commander at Obinze, the Commissioner of Police, the Director of State Security Services and Commandant of the Nigeria Security and Civil Defence Corps visited the area to reassure the community of his willingness to secure their lives and property and to draw a programme for the families of the deceased.

“Governor Uzodinma who was sober condoled with the families who lost their loved ones, as he addressed the leaders of the community at the Eze’s Palace.

“While the Governor was addressing the families, some boys among the aggrieved youths were heard making noise outside, accusing the security operatives of supporting the Oil companies and demanding that Governor Uzodinma should address them too.

“While the security operatives tried to calm them down and control the noise, one of them allegedly hid behind others and threw a stone at one of the official vehicles of the Governor where they were parked and in the process smashed the back glass.

“He was promptly arrested by the security present. While this drama was playing out, Governor Uzodinma was still inside the hall addressing the traditional ruler, community leaders and the bereaved families.

“Contrary to the claims that he was attacked, there is no truth in it as the meeting Governor Uzodinma had with the leaders of the community was fruitful while the families of the deceased were happy he came”, Nwachuku said.

Meanwhile Uzodinma has called for calm in the community, promising to deal with the situation that led to the killings.

“I will not be party to anything that will be against my people, I will enjoin all of you to remain calm as government will take all necessary steps to ensure that such thing doesn’t happen again.

“You must help me to help you, if you try to take laws into your hands for self-help, then I will not be with you. I can only be with you if you challenge me to solve the problem, in which case you must follow my rules and I will assure you of results.”

The governor expressed worries over the hazardous method used by the oil company in trucking crude instead of the conventional method of laying pipes and promised that he will tackle the issue head on with the company to forestall future re-occurrence.

“There is nowhere in the world that they truck crude oil, oil exploration is given to capable companies because of the belief that they have the facilities, technical strength and financial muscle to do a community-friendly operations, that is why the thing is given to them as professionals, we have seen that this is not the case here with this company. No government, neither the federal government nor ministry of petroleum will send anybody to come and truck crude oil and use the vehicle to start killing indigenes of the place,” the Governor said.

While assuring the people that under his watch the problems of Ohaji/Egbema will be solved, Governor Uzodinma reiterated that he will ensure that money meant for the development of the area will be put to good use.

He stated that the era of sharing money to thugs are over. “If you kill 200 people, hoping that I will pay you money to stop, I will not; rather I will pursue you till I bring you down, I will never succumb to such threats,” he warned.

Advising the leaders of the area, the governor cautioned them against using the youths of the area as thugs and turning them into drug addicts.

He warned that his government will deal decisively with anyone caught doing that no matter how highly placed.

“We cannot continue like this, if we cannot get peace, we force peace from the people as a government, the governor said.

The traditional ruler of the Mmahu,Eze A.I. Iwuogu explained that his community has lost so many lives through accident from the trucks used by Sterling Global, an oil company operating in the area to lift crude to Ndoni.

Eze Iwuogu pleaded with the governor to ensure that Sterling Global operates like other oil companies, pointing out that they are tired of burying their loved ones.

The member representing Ohaji/Egbema/Oguta and Oru West Federal constituency, Engr. Kingsley Uju stated that what his people want is for Sterling Global to stop trucking crude oil with tankers, and that they should lay their pipes like other oil companies are doing.

The Speaker of Imo State House of Assembly, Rt. Hon. Chiji Collins, the former Speaker, Rt. Hon. Goodluck Opiah, businessman, Chief Charles Orieh, among other prominent sons and daughters of the community were in attendance.

ADESOLA ADEDUNTAN, CEO, FIRSTBANK – HOW TO DO WELL BY DOING GOOD