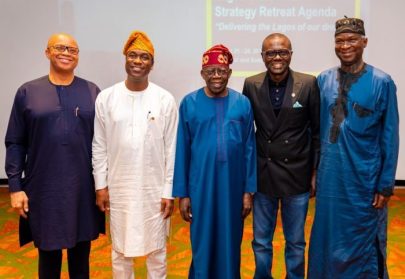 National leader of the All Progressives Congress, APC, Asiwaju Bola Tinubu has bared his mind on the administration of Governor Babajide Sanwo-Olu of Lagos State.

The former Governor of Lagos spoke on Friday at a retreat organised by the Lagos State Government for cabinet members and permanent secretaries in Victoria Island, Lagos, Southwest Nigeria.

Tinubu said he was proud of the quality of retreat put together by the Sanwo-Olu’s government, as the retreat, brought talented and resourceful individuals from both private and public sector to address the cabinet members..

“The retreat is a road map to succeed. And we are very proud of that. It is two ways to it. Residents of Lagos must have confidence in the government that is in place for them.

“The residents have seen the government is prepared to do a marathon commitment in development for them. There are some developments that cannot be seen physically. They are not just the bricks and mortars but there are so many of it. If the smart city emerges, you have more investments, prosperity and revenues.

“But the question one should ask is why is Lagos the magnet point for investors within the African continent? And the reason is that Lagos is succeeding.

“And they are building other foundations. We have highly talented people taking the affairs of the state and that is why we have other past governors and public office holders coming to the retreat to mentor the new appointees,” he said.

Sacked Ogun APC chairman curses Oshiomhole, says he will end up in ignominy