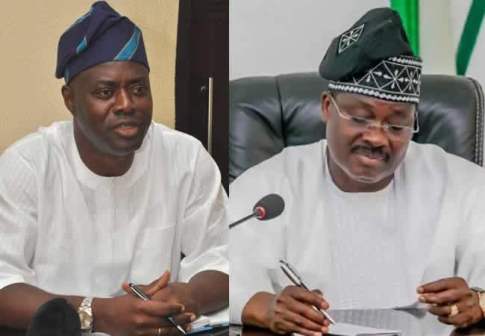 Oyo State Governor, Engr. Oluseyi Makinde on December 21, 2019 painted a gory picture of the alleged corrupt practices that characterised the administration of his predecessor, Senator Abiola Ajimobi of the All Progressive Congress, APC, in the management of the affairs of the state.

Makinde stated that the era of the immediate past administration was characterised by corruption, budget padding, mismanagement of funds, kickback syndrome, inflation of contracts’ fees, lop-sidedness in projects management, award of contracts only to their cronies and re-awarding of projects at double price, among others.

He made this disclosure on a live programme of the Oyo State Broadcasting Corporation of Oyo State tagged ‘Live chat with GSM, a quarterly session with the Oyo State Governor’.

He said, “If I should talk about the finances of Oyo State as at the time we came on board, some people will not be able to walk on the streets. Up till date, we have not bought vehicles for the office holders. If we are to buy official vehicles for myself and other office holders, we will not spend less than N3 billion and we cannot afford that now. Up till today, I am still using my personal cars in office.

“Our priority is to the people. We prioritise what we can do to the people who gave the opportunity to serve them over ourselves. We don’t want to serve ourselves. On May 6, 2019, three weeks to take over, the last administration withdrew N5.2 billion and spent it to remain N19, 000 by May 29. Soon, those involve will have to explain how they spent the money on the people.

“When I resumed, I was scared. The government was running 67 banks accounts. So I asked for all the balances of the accounts. A particular account has N300 million, and another has N20 million. I asked the accountant general to prune the accounts down and put all the money in one account and which came to about N6 billion.”

He continued, “When we assumed office, some people came to me and said that this is how they shared money. I said don’t share the money to me. Let us use it to better the lives of the people of the state. IGR has gone up a bit because we have blocked loopholes. Let me also reveal this. We did not spend government money on those Christmas decorations that you see everywhere. Normally, at the end of the year, people and corporate organisations give gifts to the governor.

“So, when they came, I called my people and told them that these gifts should be channelled towards beautifying the state instead. So, we used the gifts to do those Christmas decorations that you are seeing. If we continue to be prudent, all will be well and things will go round. It is because we cut off the wastage, that is why we are able to do some of the things are doing”.

Speaking specifically on things he has done and other things to be done, Makinde said that because he enjoyed free education of the former governor of the state, late Chief Bola Ige, he considered it imperative to ensure that students are given free education.

“I enjoyed free education during the era of Uncle Bola Ige. I have the opportunity to do the same thing. Free education is sustainable if we can block all the loopholes where money is leaking and wasting. Whatever we can realise after blocking the loopholes will go to education because when you educate people, you have liberated their minds. We are making the School Governing Board better. We will retain it.

“We want to get more interest to join and ensure that money meant for education is well accounted for. We have given subvention out and we will continue to give subvention every term and at the end of each term, they will give account of how they have spent the subvention we have given them. In our budget, a big chunk is allocated to education because if we get education right, it is a means of securing the future,” he added.