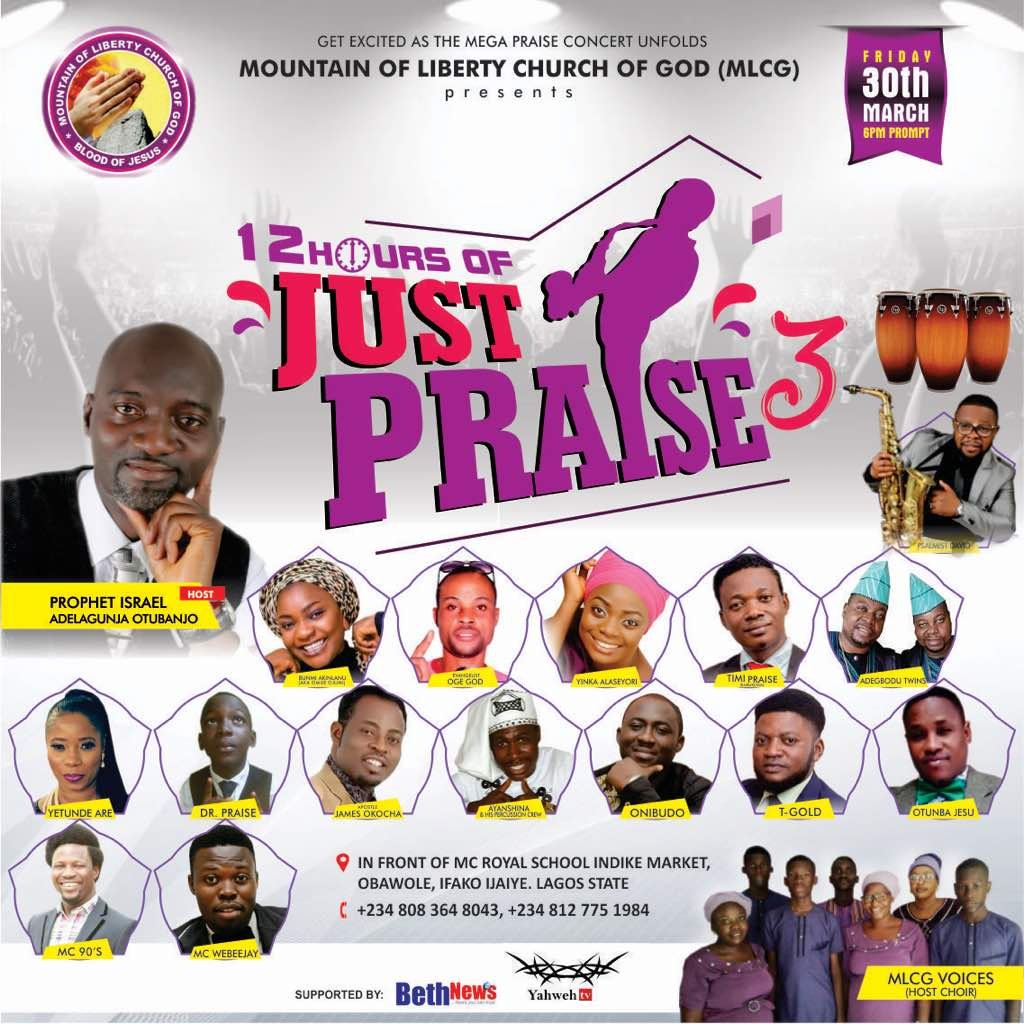 Prophet Isreal Otubanjo in his words confirmed that many who were in attendance under the roof of season 1 and 2 are still to the great wonders that took place at the events respectively. According to the man of God, praise is the only food our God deserves from us as a Christian and we can must not relent In giving  Him. Stating further, there is no other sacrifice that could be rendered unto God than just keep praising Him because in some cases when prayer seems to fail, it is advisable to switch to praises just like king David praised God and God referred to him as the apple of His eyes.

This year’s edition of Just Praise which is tagged ‘ GRATITUDE’ is taken from the book of psalms 67 [with the intention of showing gratitude and appreciation to Him.] ‘This year’s event will take another dimension because it will be viewed live on every social media as top Nigerian celebrities and great anointed men of God will be in attendance. When asked is special about season 3, the amiable man of God said the fact that the day and date falls on Good Friday[ Easter festive period].
Prophet Israel Adelagunja in his statement said the death and resurrection of our Lord Jesus Christ will be manifested as people praise God most especially many who has been on captive will be set loose because there is power in praising God. Some of the Top popular Nigeria upcoming Gospel  artistes who  will be there to showcase their talents giving  quality worship and praises to God includes  Adegbodu Twins, Bunmi Akinnamu popularly known as Omije Ojumi, Yetunde Are, Yinka  Alaseyori, Psalmist David Sax, Ayan Shina, T.Gold, Dr. Praise, Onibudo, Deboral, Monijesu,Timi Praise, Evan. Oge God, Otunba Jesu, Apostel James Okocha, Host Choir and many more. We also have one of the best Nigeria radio presenter from  Eko FM  popularly known as MC 90, MC Webeejay  on grand to drive this memorable event which is targeted to come up between 5pm till dawn.

Prophet Adelagunja therefore stand on behalf of the Church as he beseech everyone to put on the garment of praise and their dancing shoes because there will be showers of blessing upon everybody who will be attending this year.