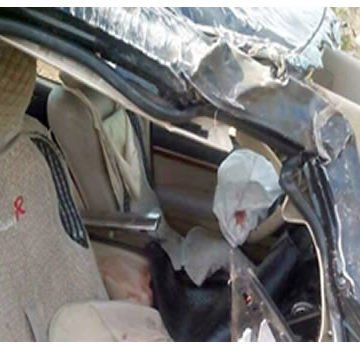 “Shagaya died in a road crash today; we are right now with the corpse at the Air Force Military Hospital, Jos,” Dandur told the News Agency of Nigeria (NAN), in a telephone interview.

Dandur said that the 75-year-old retired army general was on his way to Jos from his village in Langtang, when the accident occurred at Amper in Kanke Local Government of the State.

“Shagaya was travelling along with his driver and orderly when the accident occurred, but the two survived with serious injuries and are receiving treatment at the hospital,” he said.

“His death is too sudden. I just can’t believe that he has left us,” Dandur, who holds the traditional title of “Baraya Langtang”, told NAN.

Born in Langtang North, on Sept. 2, 1942, Shagaya served as minister of internal affairs under military regime of President Ibrahim Babangida  and represented Plateau South in the Senate from 2007-2011.

Until his demise, he was a chieftain of the APC in Plateau State.

After graduation from the Nigeria Military school, Zaria, Shagaya was posted to the Nigerian Army Corps before attending the first short service Combatant Commission Course at Nigeria Defence Academy (N.D.A) Kaduna, in 1967.

He was posted to 3 Marine Command upon commission, where he participated in the Nigeria Civil War from 1967-1970.

Shagaya became the first Field Commander to chair the Conference of the Joint Chief of Staff of the enlarged ECOMOG having Commanded the 1st Mechanised Division in the Nigerian Army including a Platoon, Company, Battalion and Brigade.

In addition to being an active politician, Shagaya was Director of the defunct Lion Bank (Nig) Plc between 1998-2003, and is the author of a book: “The Tarok History”, after publishing two other books – “Governance in Nigeria: The IBB ERA, an Insider’s View” and ”The Ministry of Internal Affairs, an Overview”.

The Fallacy That GTBank Hates Innoson And Ndigbo