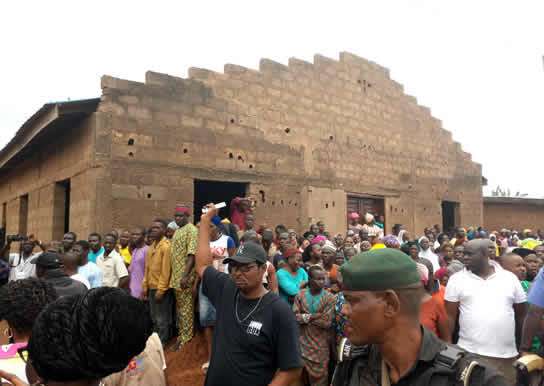 It was also reported that Akindele’s lover, who is known as Iya Anu, was murdered before her body parts were ripped apart by the bricklayer.

The Ogun State Police Command under the Commissioner of Police, Ahmed Iliyasu, has described the act as a conspiracy, murder and ritual.

How the bricklayer carried out the act
The Ogun state police command alleged that Akindele invited the late Iya Anu to his rented apartment, where he had sex with her before allegedly killing her.

The bricklayer reportedly used a pestle-like wood to smash his lover’s head until she died.

Akindele allegedly went further to cut off his lover’s head and hands, cut her open to also remove her intestines. He reportedly dumped the remains of Iya Anu after her body had been decapitated in an uncompleted property close to the scene of the crime.
The decomposing body has since been recovered by the Police and the men of Vigilante Group of Nigeria.

It was also reported that the bricklayer allegedly took the intestines of his murdered lover to Ayodele Bamiduro, the founder of Lion of Judah Church of Christ.

In a corner of Bamiduro’s church lies the severed head, hands and the intestines of Akindele’s murdered lover buried.

Police arrest bricklayer and church founder for prosecution
Akindele and Bamiduro have been arrested as suspects in the murder case.

Describing Akindele’s act as a conspiracy, murder and ritual, the Ogun state Commissioner of Police, Ahmed Iliyasu, said Akindele confessed that the deceased was his lover and that they had dated for two years before he killed her.

Ilyasu also noted that on August 10, 2018, the Baale of Igbore Robiyan reported the discovery of a decomposing headless body in an uncompleted building to Agbado Divisional Police headquarters.

The police commissioner also said the suspects will be arraigned in court after due investigation.

VICTOR MOSES: “I will start property business after Chelsea exit”