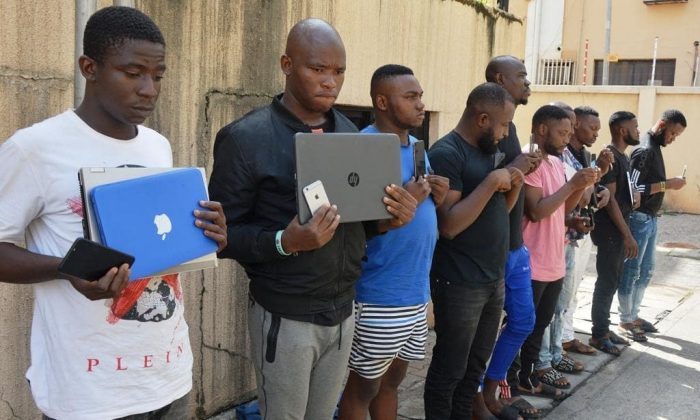 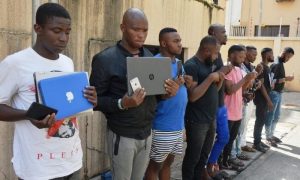 Some cyber criminals arrested by EFCC

Maha convicted and sentenced them to varying terms ranging from three to six months imprisonment, with option of fines N300, 000, after they pleaded guilty to all the charges preferred against them by the Economic and Financial Crimes Commission (EFCC).

While sentencing the convicts the judge ordered them to forfeit some of the items seized from them. The items include, laptops, phones among others recovered from them during investigations to the Federal Government.

Maha also ordered the convicts to sign an undertaking to be of good behaviour and never to be involved in any other form of fraud within and outside the country, adding that failure to comply will attract judicial sanctions.

She ordered the convicts to refund all the monies fraudulently obtained from their victims.

Earlier, the EFCC prosecution counsel, George Chia-Yakua informed the court that in June, the convicts were in possession of document of Scanned FBI Logos and U.S. Naval Seal.

The anti graft agency also said the convicts were caught with documents labelled U.S. Court of Appeals for the Armed Forces purportedly signed by Lt.- Gen. T.T Luis Rodulf and U.S Army Judge, Fort Knox, among others, which they knew contained false information.

Yakua, said the offence contravened the provisions of Sections 33 of the Cybercrime Prohibition & Prevention Act, 2015 and section 6 of the Advance Fee Fraud and Other Fraud Related Offences Act, 2006.

However, due to the plea bargain agreements separately entered between them and the EFCC, the original charges were replaced with the amended charges as presented before the court on Friday