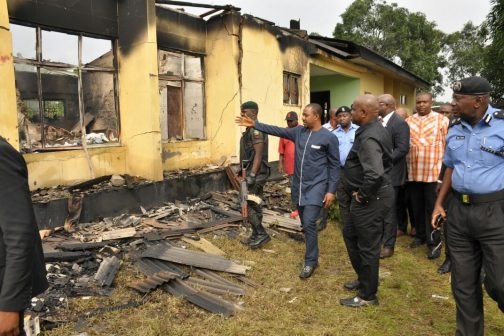 The gunmen left on their trail expended bullets and destruction of many vital and sensitive documents slated for the conduct of the local government election.

Bori, which is also the traditional headquarters of the Ogoni ethnic nationality has a record of electoral violence. In 2015, the liasion office of Senator Magnus Abe and the office of the Independent National Electoral Commission, INEC, were set ablaze by arsonists.

The Director of Public Affairs and Civil Education, Mrs. Menney-Amgbare Sarah Hope, confirmed that some sensitive documents meant for the conduct of the election were burnt.

She disclosed further that some expended bullets were recovered at the scene of the incident. No live was lost.

Ahead of the election, there have been accusations and counter accusations by aspirants into various councillorship positions under the platform of the Peoples Democratic Party (PDP) that some persons have been imposed on the party as favoured candidates for election against rules of the party.

Meanwhile, the All Progressives Congress, APC, in Rivers State is boycotting the election because of a case it instituted against the government over the sacking of council chairmen and councillors elected under the APC government.

They argued that the planned election is subjudice to the court case.