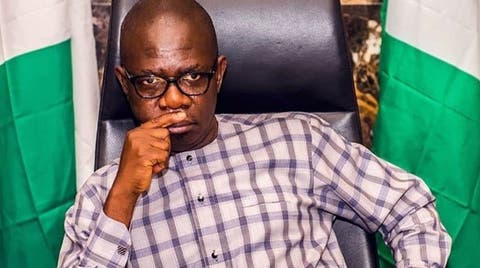 A Chieftain of the Peoples Democratic Party in Ondo State, Mr. Timi Olopele, has dragged the state Deputy Governor, Mr Agboola Ajayi, to the state High Court, seeking his disqualification from the primary holding on July 22, 2020.

Ajayi is one of the aspirants contesting the PDP governorship ticket in the forthcoming primary.

In the suit number: AK/45M/2020, Olopele prayed the court to stop Ajayi from participating in the primary election of the party, saying he (Ajayi) breached the code of conduct for public officeholders. He asked the court to ban the deputy governor from holding any public office for a maximum period of 10 years.

The ex perte motion brought before the court was instituted with originating summon that was dated July 17, 2020.

Olopele averred that the deputy governor had consistently acted in “breach of Section 1, 5th Schedule, Part 1 of the Code of Conduct for Public Officers and Section 9 of the constitution of Federal Republic of Nigeria, 1999 as amended. ”

The plaintiff also prayed for Ajayi’s disqualification for “breaching of the provisions of the regulations of the West African Examination Council Act, Cap W4 Law of the Federal Republic of Nigeria, 2004.”

He (plaintiff) claimed in the suit that Ajayi had breached the extant laws that regulate WAEC and Nigerian Law School attendance while he was serving as elected local government chairman and member of the Federal House of Representatives respectively.

However, the Publicity Secretary of the PDP in the state, Mr. Zadok Akintoye, confirmed that the deputy governor  submitted Secondary School Certificate as one of the requirements to contest in the governorship primary election of the party.

He said, “That is the least minimum required qualifications by the constitution, but often time people that have a questionable qualification and which has been a source of litigation can avoid that because if there is any litigation, it is what was submitted that would be challenged and not what he claimed to have because that will be circumstantial in evidence.”

In his reaction, the deputy governor described the suit seeking his disqualification from the primary of the PDP as an exercise in futility.

His Chief Press Secretary, Mr. Tope Okeowo said, “We are not surprised because of the imminence of the defeat of the architects and their masters at the poll.

“The facts and issues in the matter are the same as the case already adjudicated upon by the Court of Appeal in case appeal number: CA/B/EPT/330A/2008, between the Deputy Governor, Hon. Agboola Ajayi (then Member of the National Assembly) and Prince Olubukola Ebietomiye of the Democratic People’s Alliance, in 2007, wherein the appellant was absolved of any wrongdoing.